Dimash in Vitebsk: Big solo concert is to be expected, unless the pandemic hits again

July 15, 2021
2342
Dimash World Dimash in Vitebsk: Big solo concert is to be expected, unless the...
Dimash WorldTop News

Dimash in Vitebsk: Big solo concert is to be expected, unless the pandemic hits again

A press conference, where Dimash Qudaibergen spoke about his plans, family and his attitude towards show business, took place in Vitebsk, Belarus. That is also where the Slavianski Bazaar jubilee festival opened yesterday.

Today, on July 15, a press conference the “Star Hour” was held with a Kazakhstani performer. The online event was available to viewers on the OK LIVE streaming service and the YouTube platform. The press conference was hosted by Belarusian TV presenter Dmitry Karas. 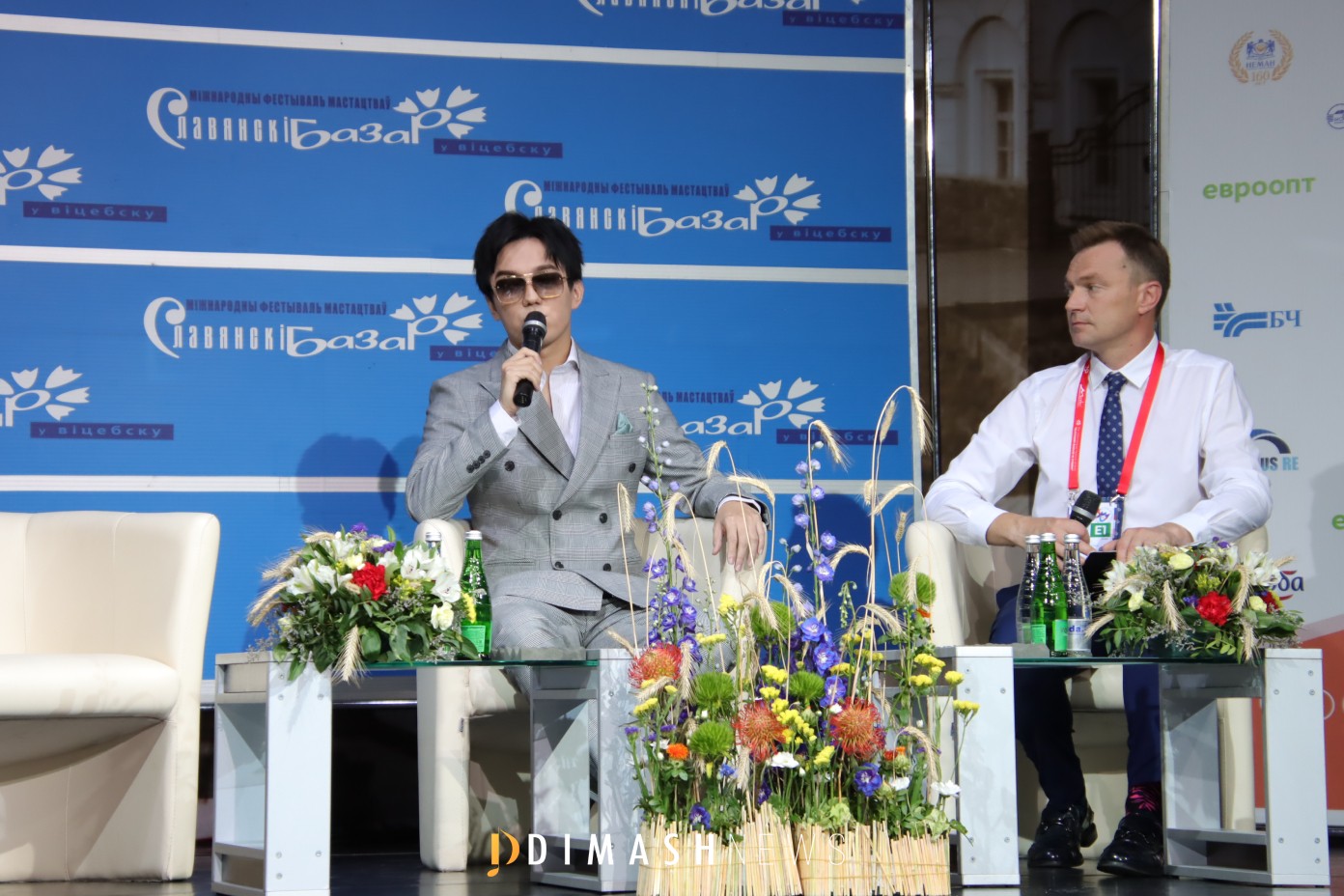 When asked who Dimash would be rooting for, the artist honestly replied that, as a patriot, he would support a participant from Kazakhstan. However, he added that this does not mean that there will be any concessions on his part:

“Slavianski Bazaar” is a platform where all borders between countries and mentality are erased, and all people communicate in the language of music. I have a huge responsibility, much greater than when I myself took part as a contestant. “ 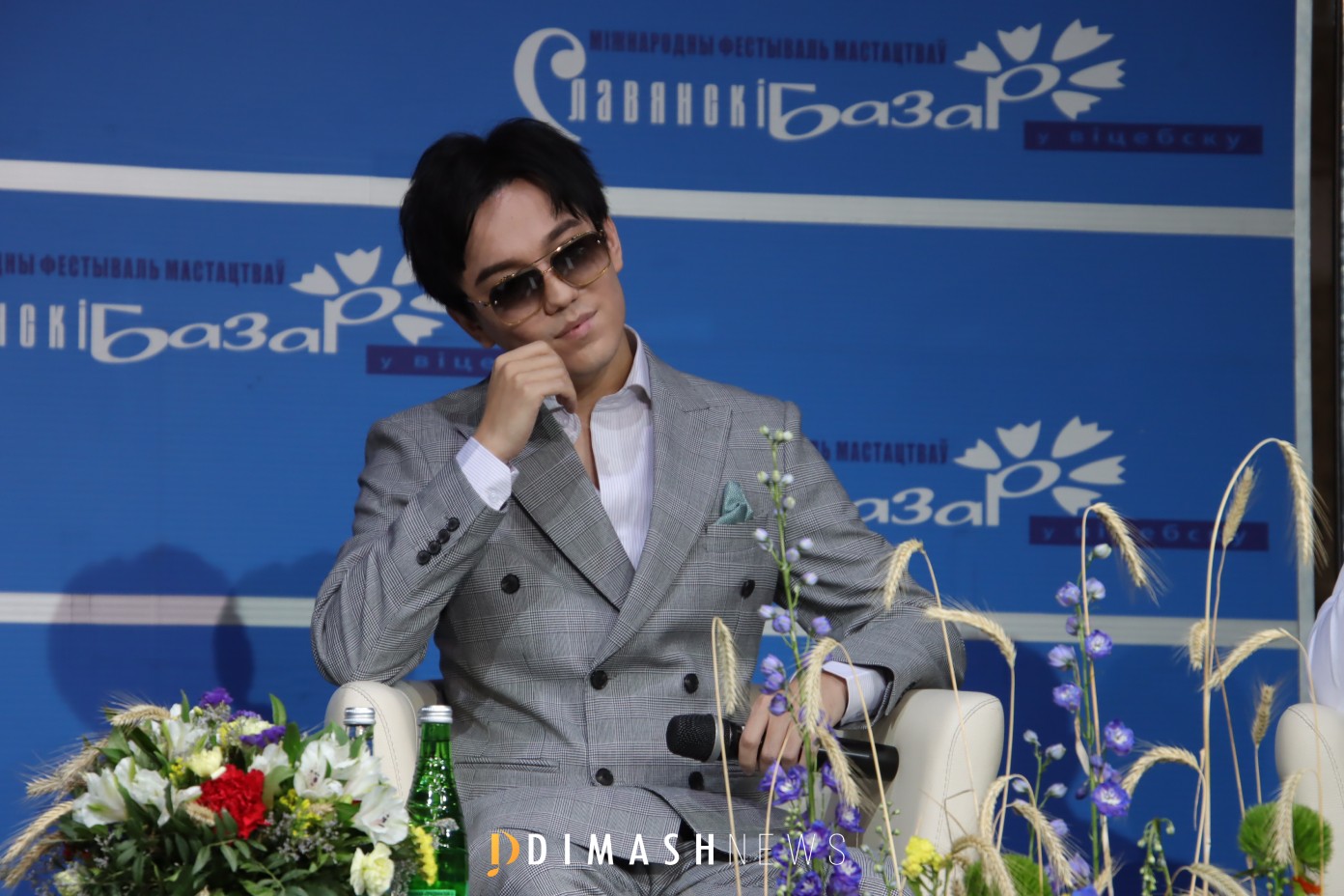 Dimash wished good luck to the participants of the competition and noted that, first of all, he would pay attention to how the contestants would cope with the selected material. His advice is to choose a less technical song, but perform it with all that you have, to100 percent.

When Oksana Ivanova, a journalist for DK Media World asked about the upcoming concerts, Dimash bowed deeply to his fans and thanked them for the fact that, despite the situation with the pandemic, they continue to wait for his concerts and do not return tickets.

He also announced the long-awaited news: in six months a big stadium concert with a new program will take place. The date and venue will be announced later. 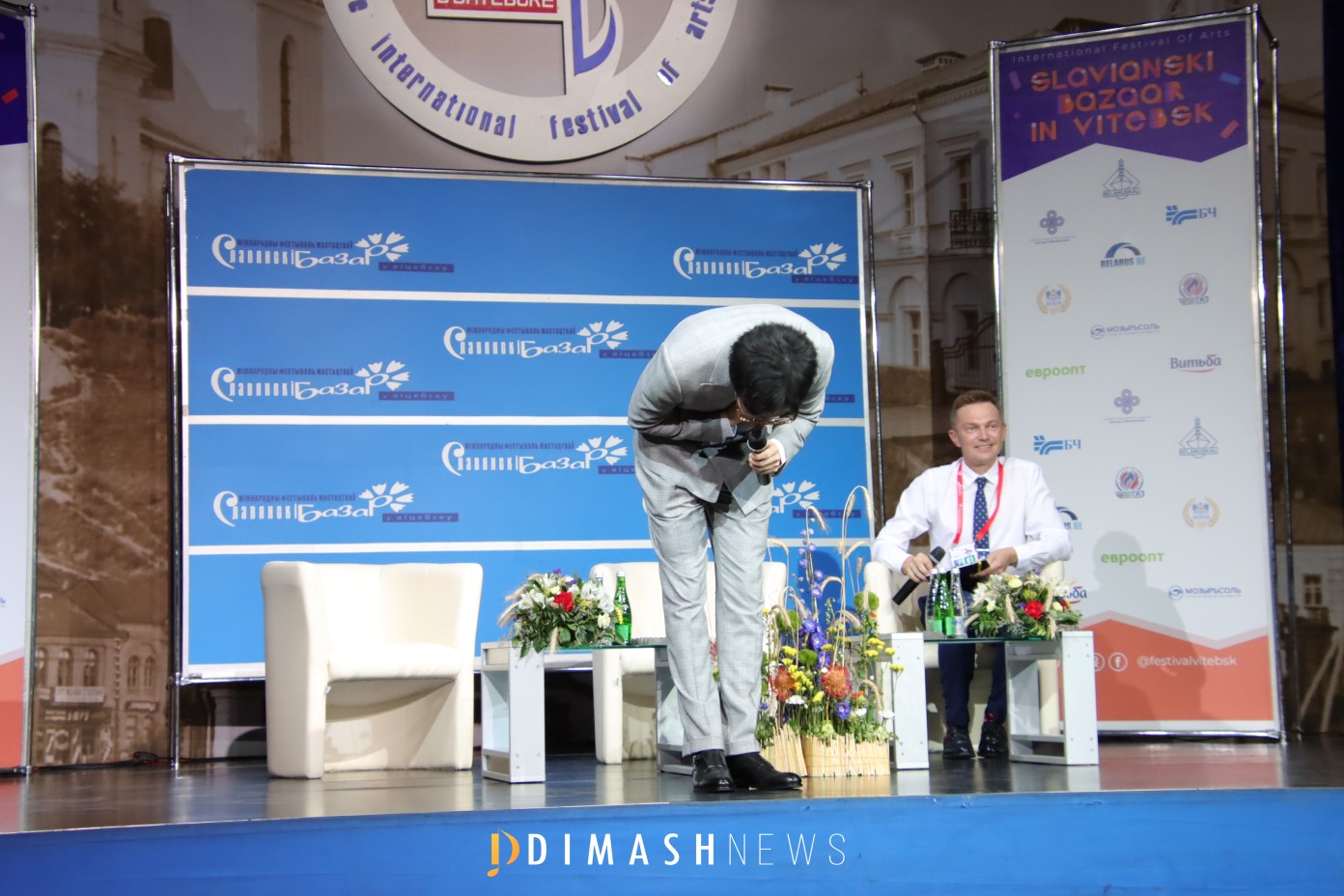 Speaking of dreams, Dimash shared that one day he wants to give a concert at the legendary Wembley Stadium:

“In my head I always imagine my every concert as it should take place. Perhaps this is due to the fact that I am too self-critical, I do not like every concert I do 100%. The only consolation is that my viewers and listeners support me very much.” 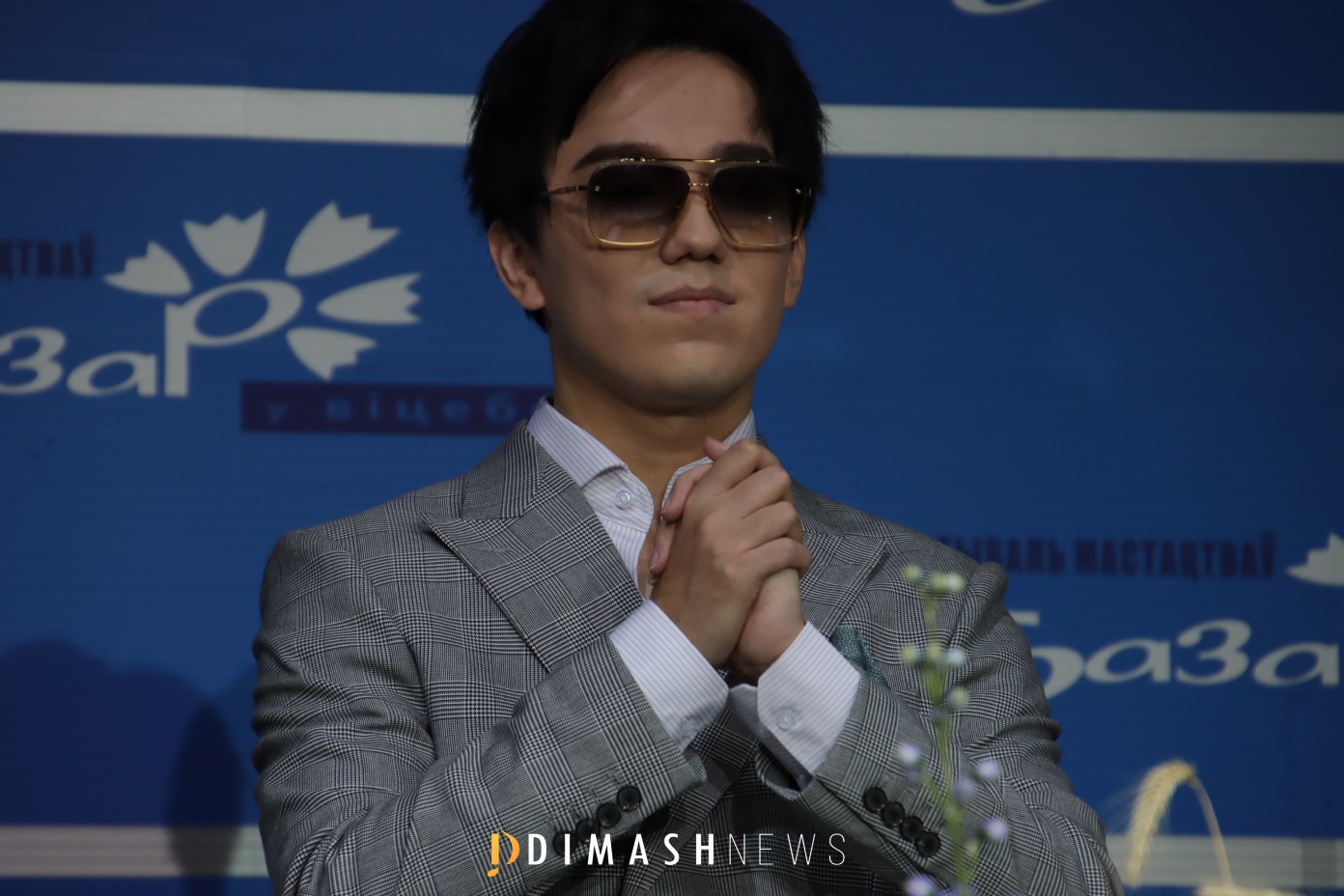 When Oksana Ivanova, a journalist for DK Media World asked what influences his work, he speaks of Batyrkhan Shukenov and collaborations with famous Kazakhstani composers Renat Gaisin and Kuat Shildebaev, Dimash also said:

“I miss Batyrkhan-aga very much, we grew up on his music, he will always remain a real example of how an artist should behave. To this day, he is a guide and teacher for us. For us, it is like a whole encyclopedia. With Renat Gaisin, a composer who collaborated with Batyrkhan-aga for a long time, we are on very good terms. Kuat Shildebaev is the composer who composed the biggest hit in the Kazakh language “Otan Ana” for Batyrkhan Shukenov. They recorded a whole album, which was a tremendous success in Kazakhstan and the CIS countries.” 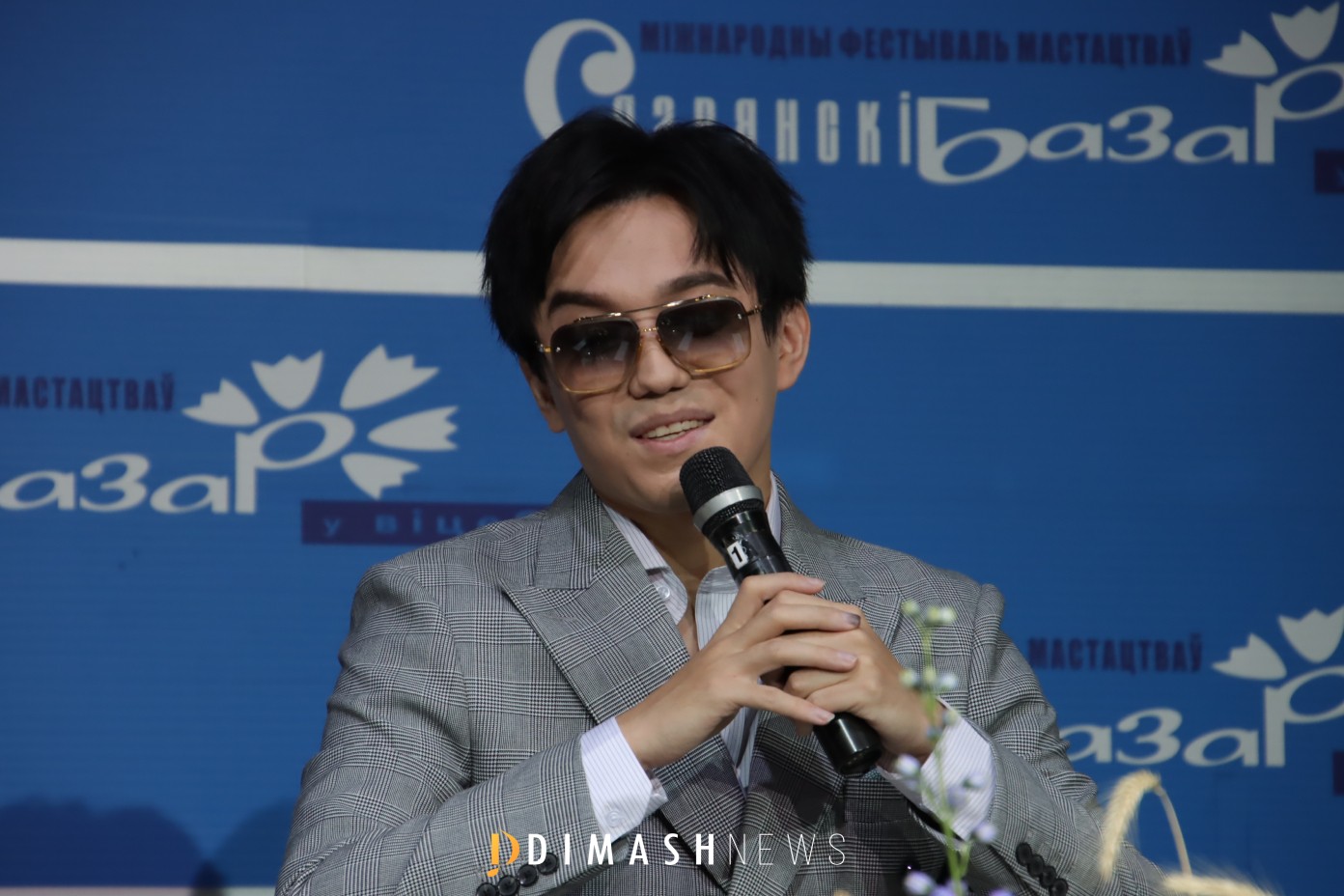 Journalist Tamara Vyatskaya, who in 2015 took the first interview with Dimash at the Slavianski Bazaar, asked if his idea of ​​show business had changed in six years. To this question, he replied that by nature he considers himself more of a creative figure than a representative of show business:

“To be honest, I never liked it, – said the singer, – but I am infinitely in love with music. It’s just that in the modern world one cannot exist without the other, so I have long been accustomed to show business.”

The event also raised questions about Dimash’s family. The singer spoke about his upbringing and, together with the rest of the press conference participants, congratulated his mother Svetlana Aitbaeva, who celebrates her birthday on this day.