“Qazaqstan” rhododendron to appear in Latvia

“Qazaqstan” rhododendron to appear in Latvia

A new variety of rhododendron named “Qazaqstan” in honor of the 30th anniversary of the country’s independence and Dimash Qudaibergen’s birthday has been bred in Latvia at the request of the Latvian fan club of the Kazakh singer, DimashNews reports. 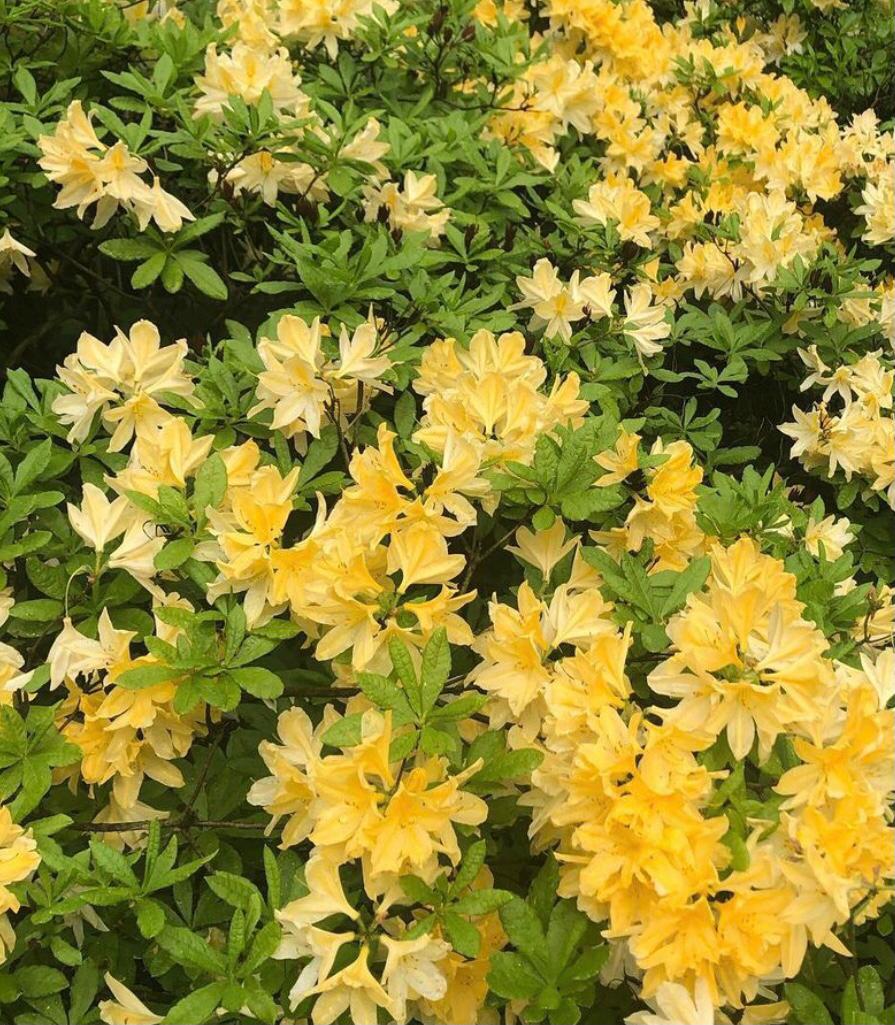 On May 21, 2021, the corner of Kazakhstan was opened at Babite rhododendron park of the University of Latvia. The event was dedicated to the 30th anniversary of the republic’s independence, as well as the presentation of Qazaqstan rhododendron.
The new plant variety was bred by the main Latvian plant breeder Gunita Riekstiena at the request of Dimash Qudaibergen’s Latvian fans in honor of the 30th anniversary of independence of the country and the singer’s birthday. 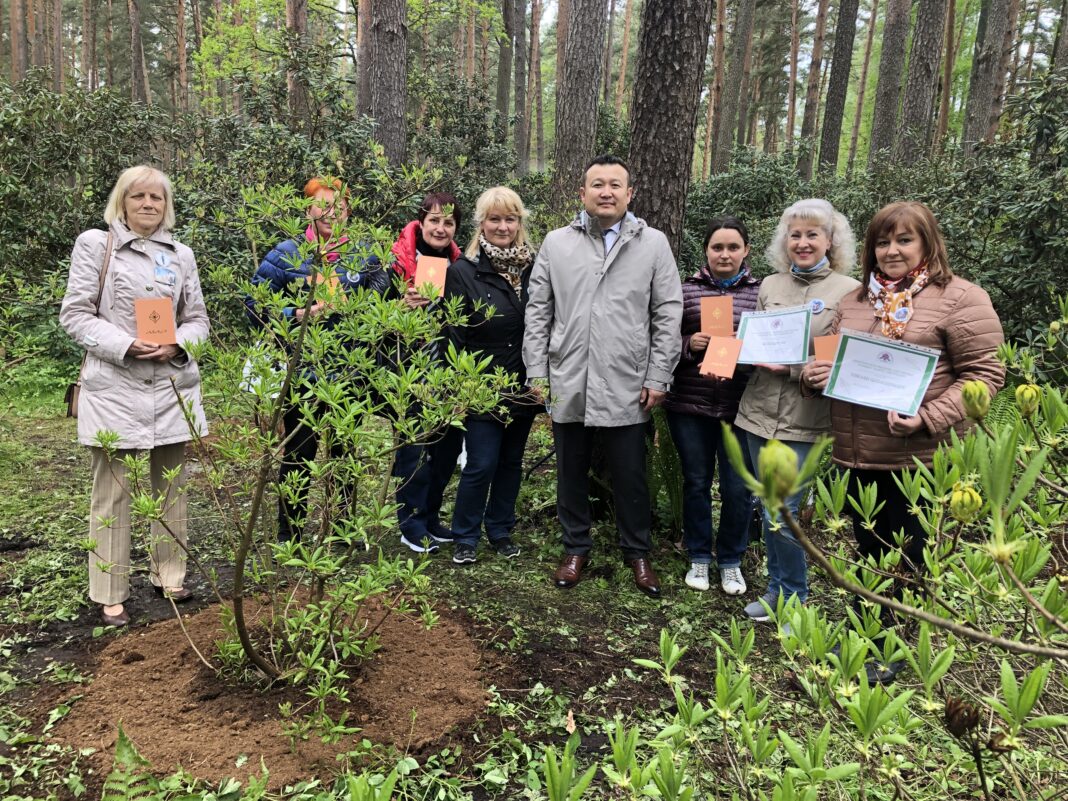 As part of the event “Qazaqstan”, “Dimash Qudaibergen”, and “Miuaniz” rhododendron varieties were planted in the main alley of the park forming the corner of Kazakhstan. The latter two were bred in 2020 and named after Dimash and his grandmother Miua Nizamutdinova. 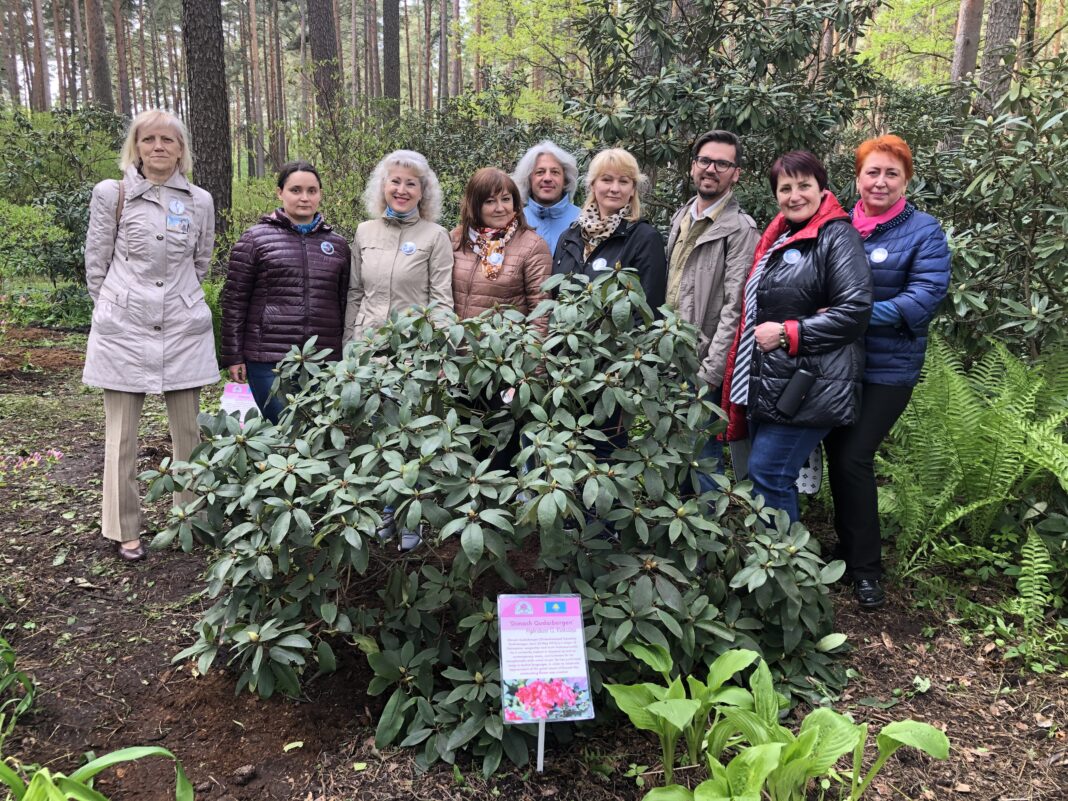 The celebration was attended by Consul of the Embassy of the Republic of Kazakhstan in Latvia Kairat Kambarov, the management of the park and Babite breeding nursery, members of the Association of Kazakhs in Latvia “Saule” and Dimash Qudaibergen’s Latvian fan club “Dimash Latvia Dears”, as well as people of culture and art in Latvia. 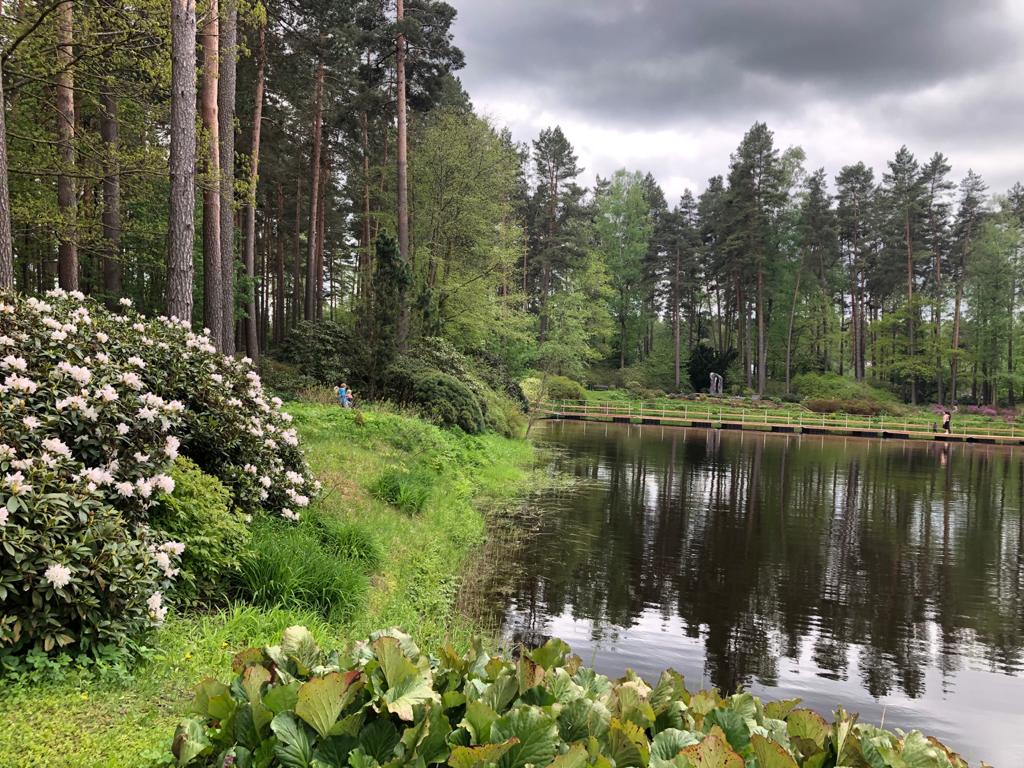 The embassy representative thanked the fan club and the management of the park for their great work in the promotion of Kazakhstan and its culture in the European Union and presented and presented Dears with the book “Abai’s Way” in Latvian language. 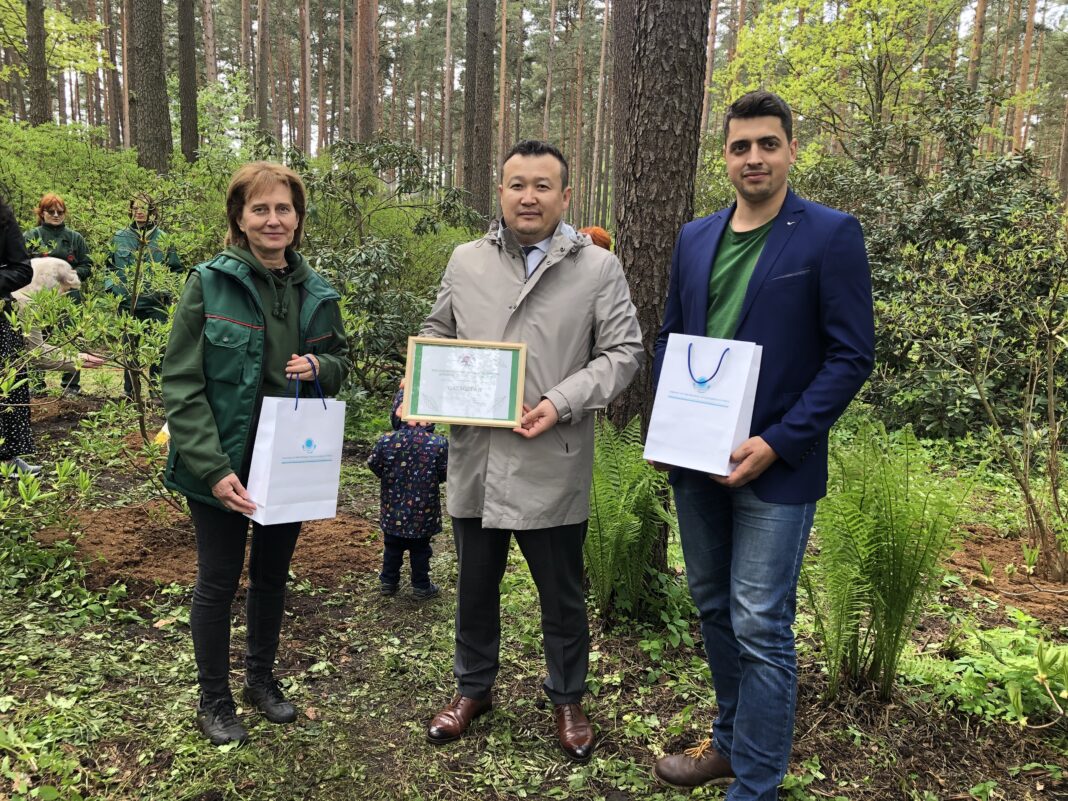 Qazaqstan rhododendron is a perennial plant, which lives up to 200 years. With the blue sky in the background, its large yellow-gold flowers resemble the national flag of Kazakhstan.

Babite Rhododendron Park and its breeding nursery are the only ones in the Baltics and one of the largest in Europe. They accommodate an area of 12 hectares in a beautiful location between Riga and Jurmala. More than 350 varieties of these majestic royal flowers grow in the park. 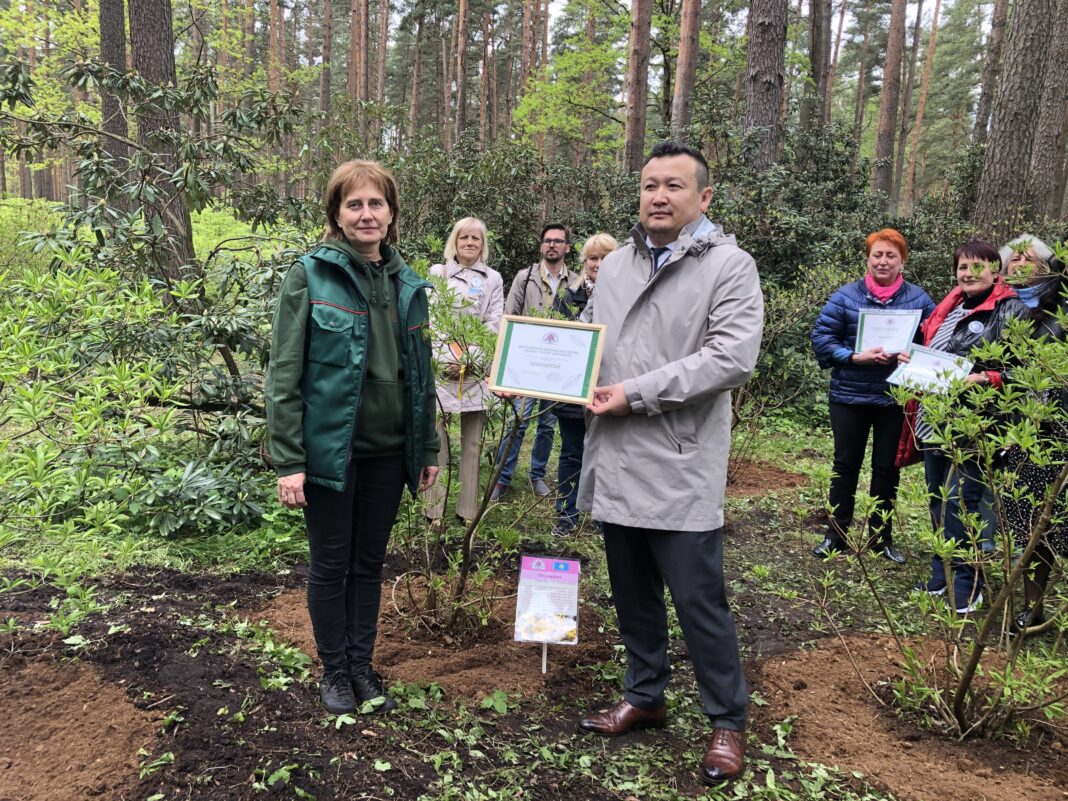 Qazaqstan variety has a Latvian certificate, and it will also be registered with the UK Royal Horticultural Society. Work on obtaining seedlings of new rhododendrons is about to start soon.
The chief breeder of the nursery, Gunita Riekstiņa, shared how the event became possible:

“Last year, at the request of the Dimash’s Fan Club, we certified two new varieties of rhododendrons “Dimash Qudabergen” and “Miuaniz” in honor of the singer’s birthday. After a while, Latvian Dears approached us with a question whether it would be possible to certify a new variety this year and name it “Qazaqstan” as this year is anniversary for the country. But the process is not that easy and quick as it may seem.” 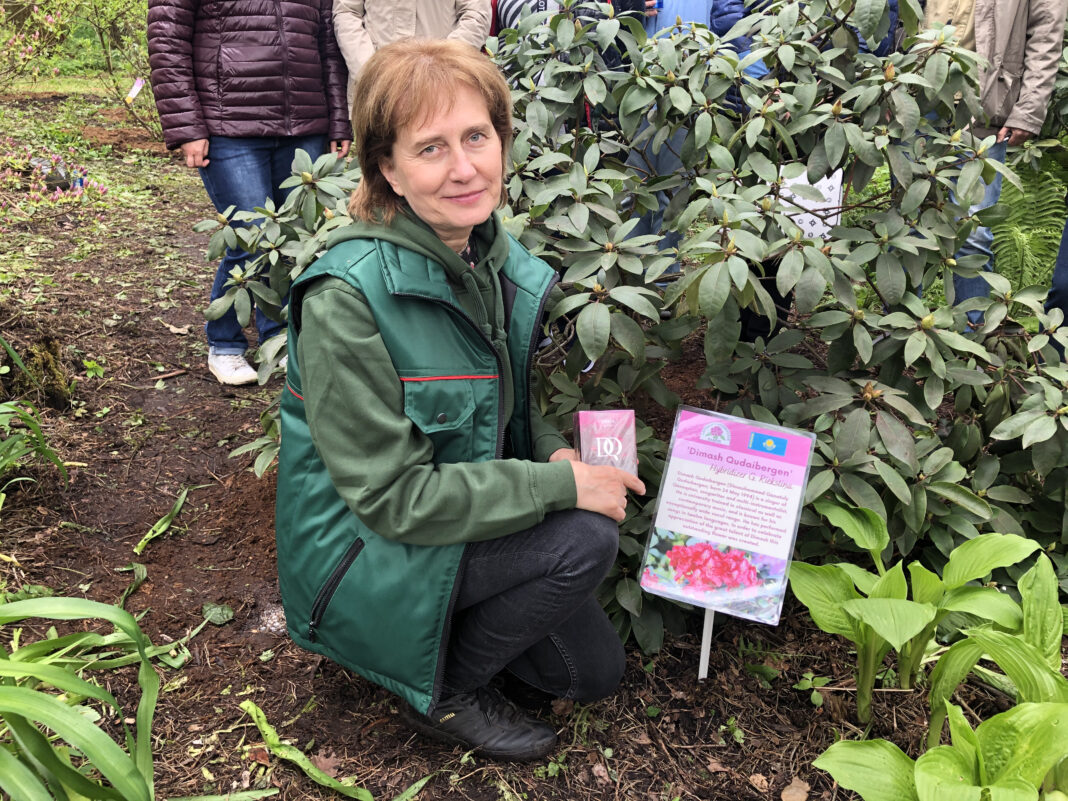 Luckily, by that time the nursery had received a deciduous frost-resistant variety with bright yellow-golden flowers, which not only is well suited to the harsh continental climate of the capital of Kazakhstan, it will also resemble the country’s national flag by blooming against the blue sky.

“After coordinating with the authorities and getting all the permits around the world, we got a new variety of this royal flower called “Qazaqstan”. Now there are three varieties related to this beautiful country, which is very much loved in Latvia. After that, the park management decided to plant them together in the main alley and thus create the corner of Kazakhstan in the park,” Gunita Riekstiņa explained. 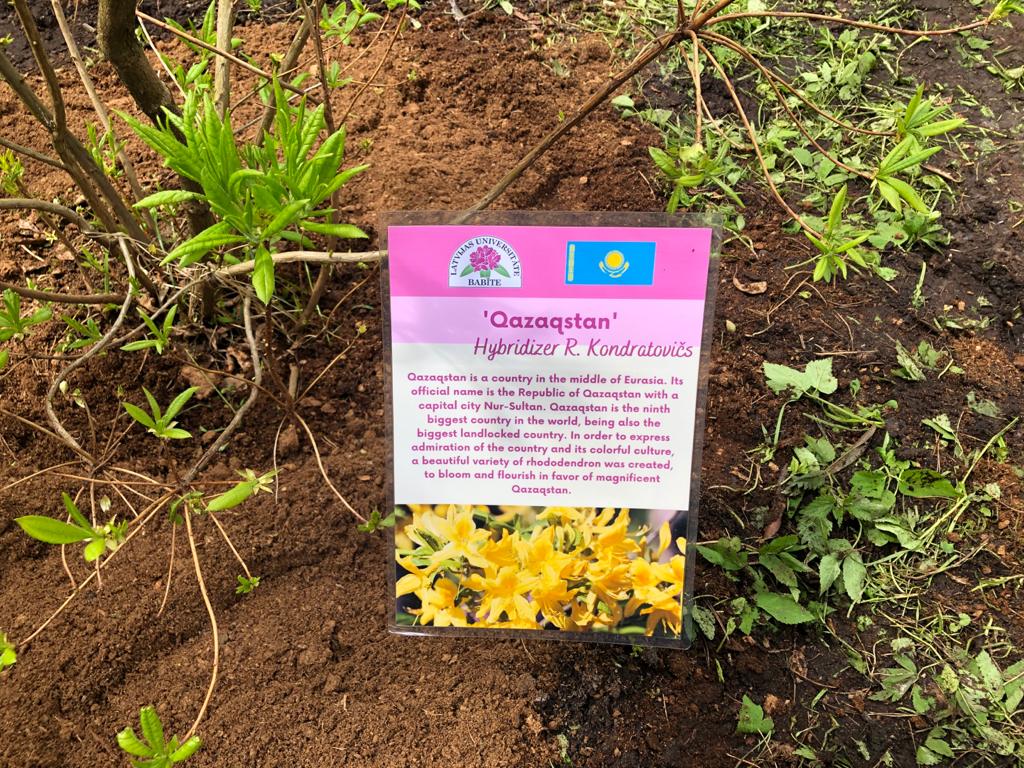 “After celebrating Kazakhstan’s Independence Day in 2020 and bearing in mind that the coming year would be anniversary for the country, we started thinking about a gift both for Dimash and for his beautiful homeland, which he made all of us fall in love with. We immediately decided to ask Gunita Riekstina again to name another variety of the royal flowers in honor of the Republic of Kazakhstan. There was no limit to our joy when she informed us that it was possible to certify a rhododendron with yellow-gold florets. And when it came to opening the corner of Kazakhstan in a truly heavenly place – Babite park – we were absolutely happy. Many thanks to everyone who supported us in this noble and so necessary activity for all!”

During the event, the Dears presented Gunita with “DQ” perfume as a token of their great appreciation for helping make their dream come true.

The opening ceremony of the Kazakhstan Corner in Babite Park and the planting of the three varieties of rhododendrons, Qazaqstan, Dimash Qudaibergen and Miuaniz, was accompanied by Kazakh songs performed by Dimash. The guests could taste national Kazakh bauyrsaks, which were made with love by one of Latvian Dears.