Yesterday in Almaty there was a world-class show – a solo concert of Dimash Qudaibergen “Stranger”. The magnificent sound, light, scenography, costumes, and staging of the numbers captivated the audience from the first seconds. Many guest artists and authors, different dance groups, specially filmed video-installations provided diversity and, at the same time, created a unified concept of the show. 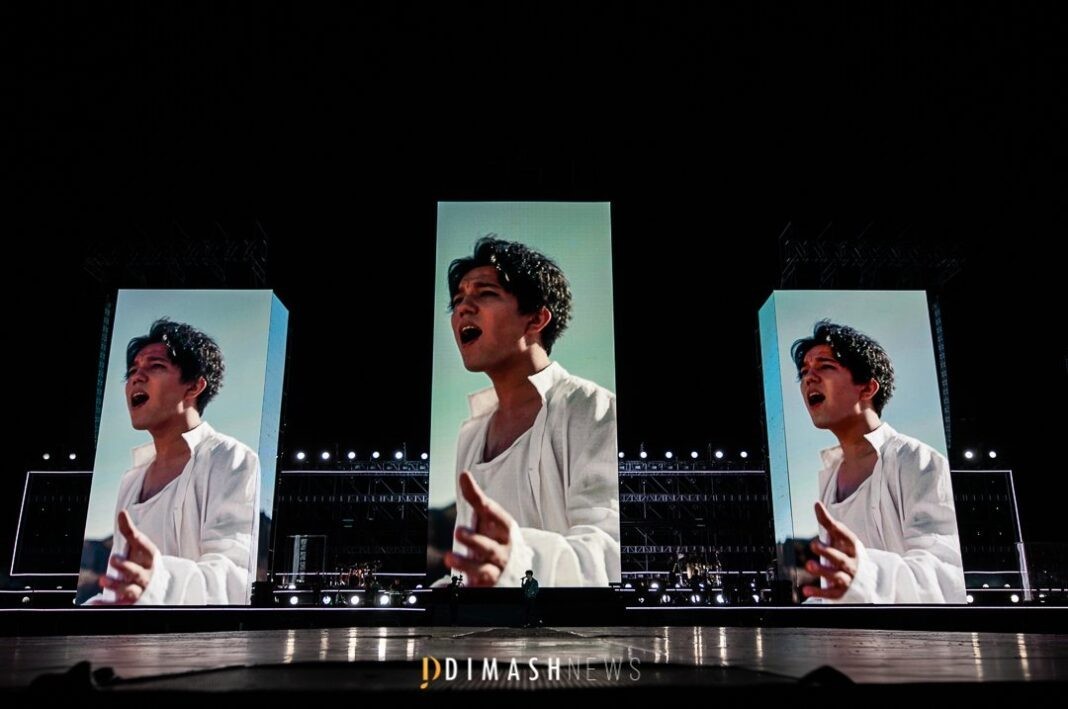 Almaty. Evening. More than 25 thousand spectators gathered at the Central Stadium. Exactly at 20:00, in the silence and darkness of the stadium, lit only by the lights of lanterns, as if in a single breath of all the spectators appeared Dimash.

The artist started the first song, and in an image of the Golden Man he came down from a great height. Golden acquired a different semantic coloring, the frames of the Charyn Canyon on the screens added magic to the event. In continuation of the fire theme, the second composition Zalyn ignited with a beautiful dance and dynamic rhythm. 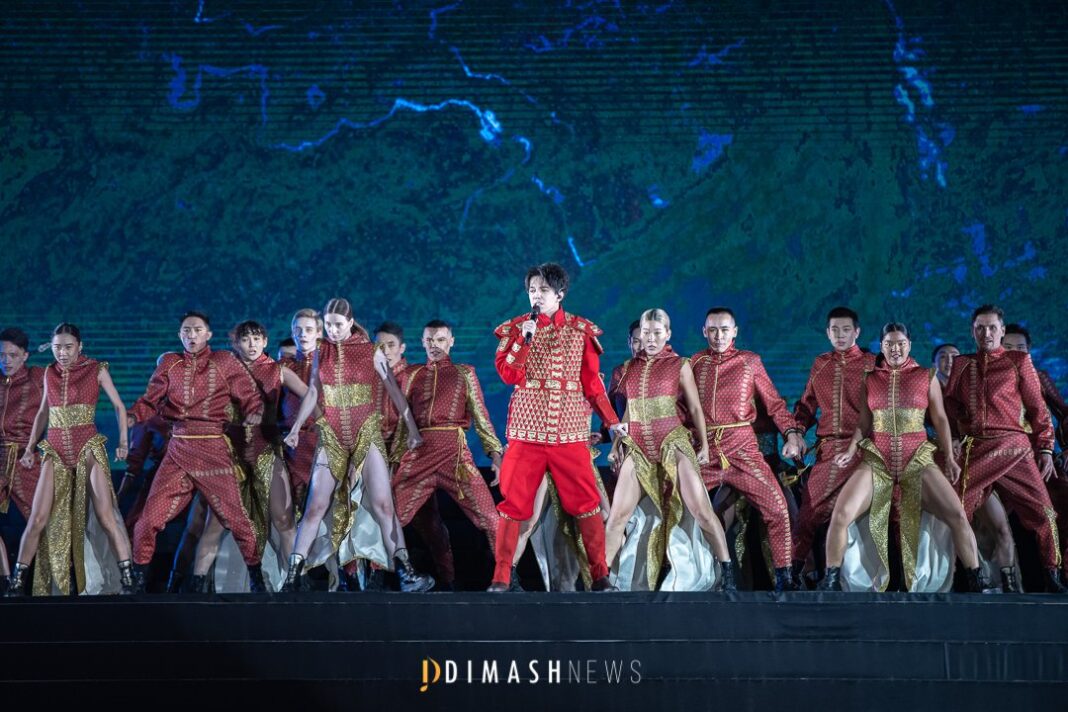 The fragile figure of a dancer in a ballet with national coloring set the mood for the next song. “If I never breathe again” on the background of frames of the moonlit sky created the atmosphere of unearthly love, and the girl’s handkerchief, raised by Dimash, completed the story.

The picture changed, a storm covered the stage, dancers in interesting costumes and wide-brimmed black hats accompanied the majestic “Olympico”. The first notes of the next song sounded, and the dark and light sides entered the “Battle of Memories”. Dimash took turns joining the different colors, showing the inner struggle between light and darkness. 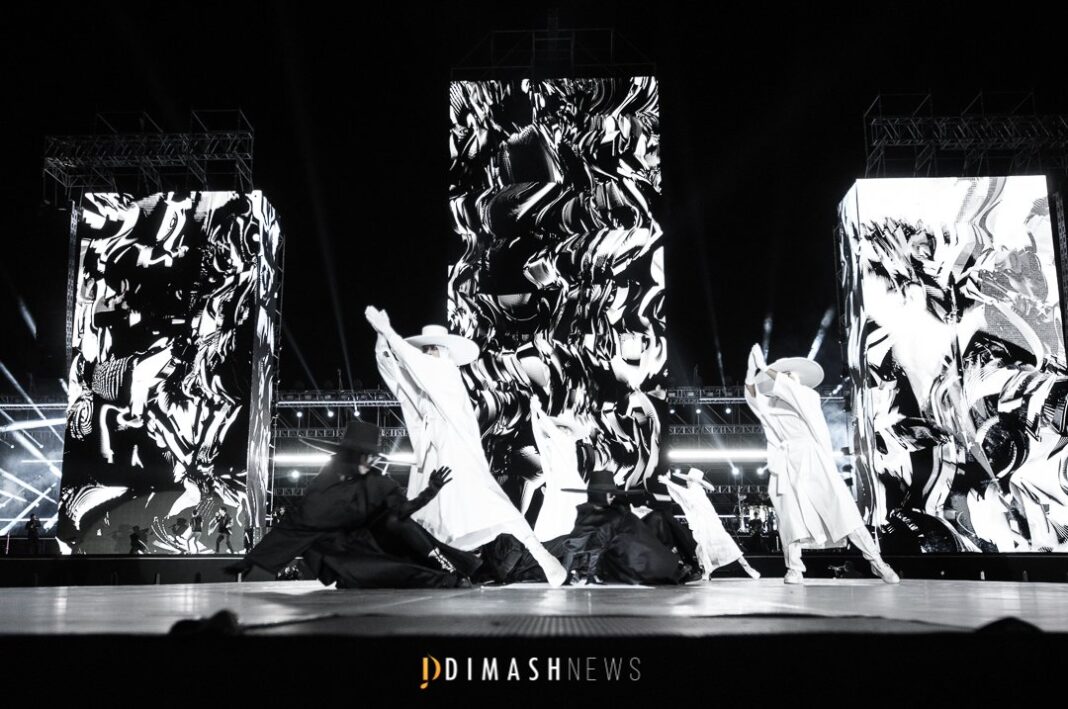 As the winner of the Light, Dimash performed the “Ave Maria” with a long last note, taking the audience to the depths of the universe. Knowledge of the world continued in the composition “Know”. 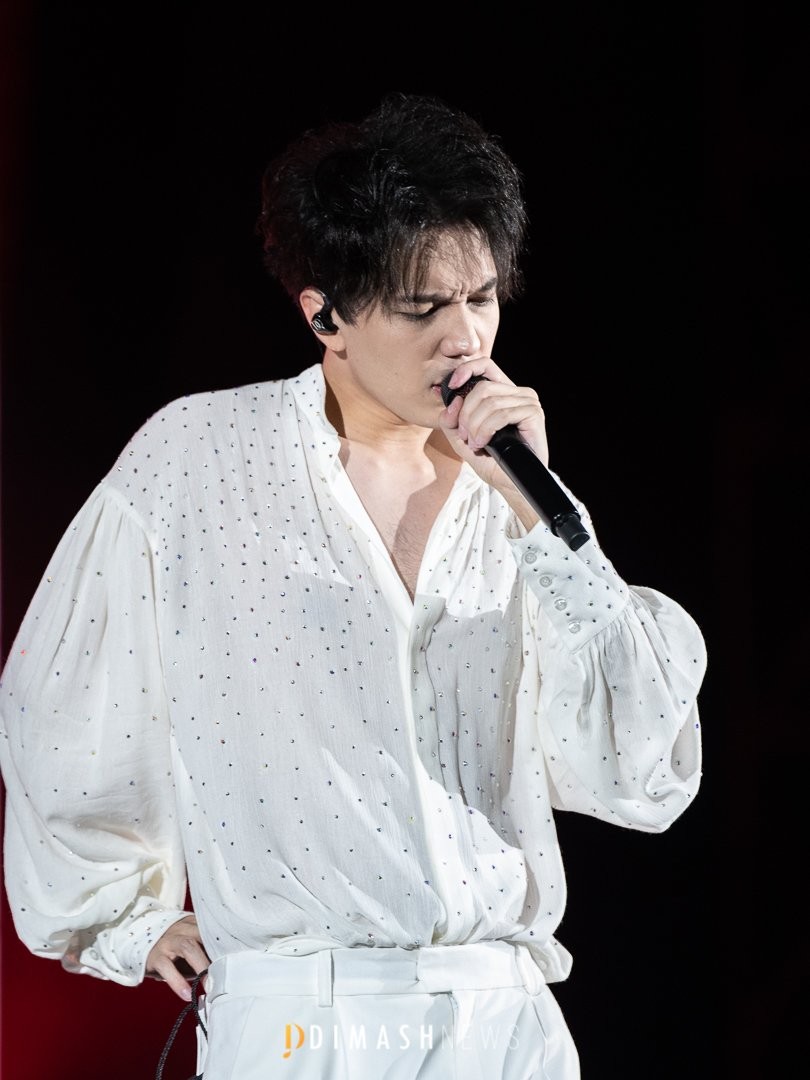 Before the next song, the artist asked the audience to sing along with him if today is an unforgettable day for the audience. Dimash’s fans immediately sang along with a chorus that sent shivers down their spines. “Unforgettable Day” really didn’t want to end, the audience sang the refrain of their favorite song again and again, and the artist seemed ready to listen to his fans endlessly. 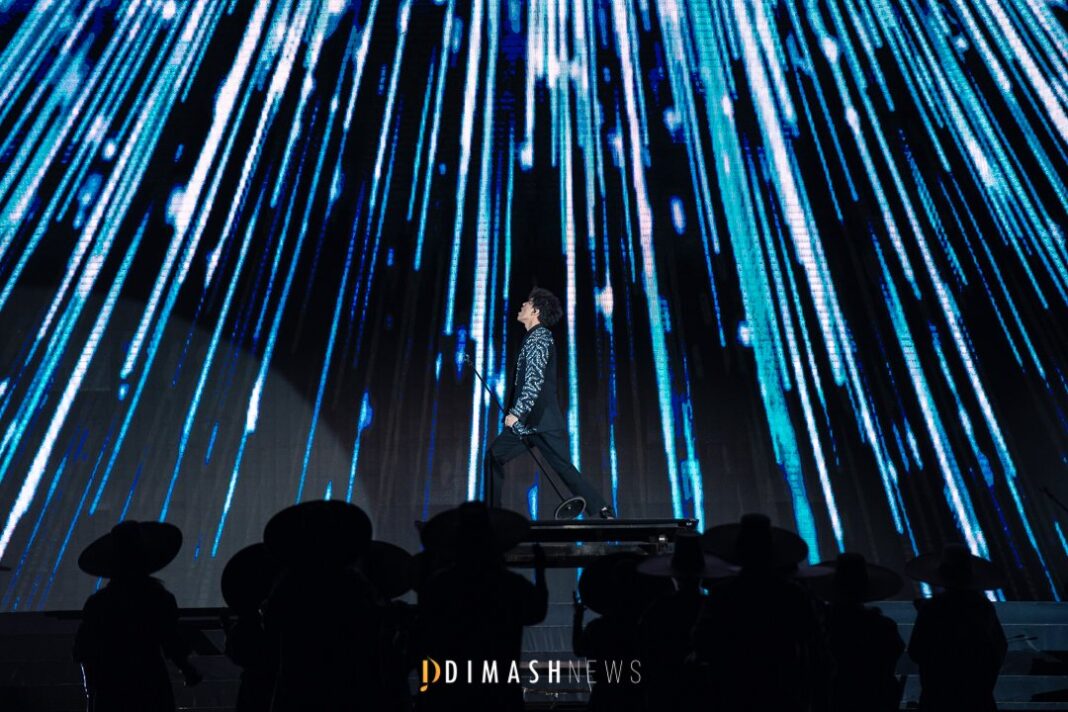 The Dears were so enthusiastic about singing that Dimash decided to continue singing and had the whole stadium repeat after him different musical phrases, which made both sides – the performer and the audience – happy.

The evening continued with the modern dances “Give me your love” and “Be with me”. Bright dancers in colorful costumes created the atmosphere of a youth party, Dimash danced with them, showing ease and ease, Dears in the fan zone danced and sang along with the artist. 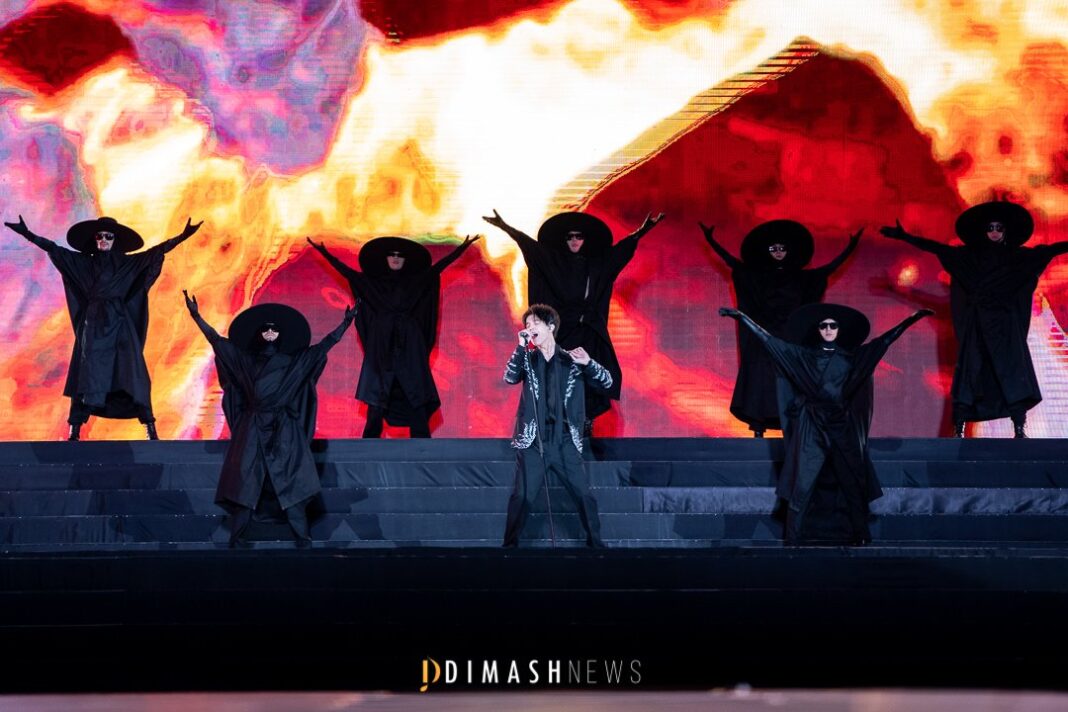 And then the first premiere of the concert took place. Dimash on the front stage, his younger brother Abilmansur, the songwriter, at the piano. 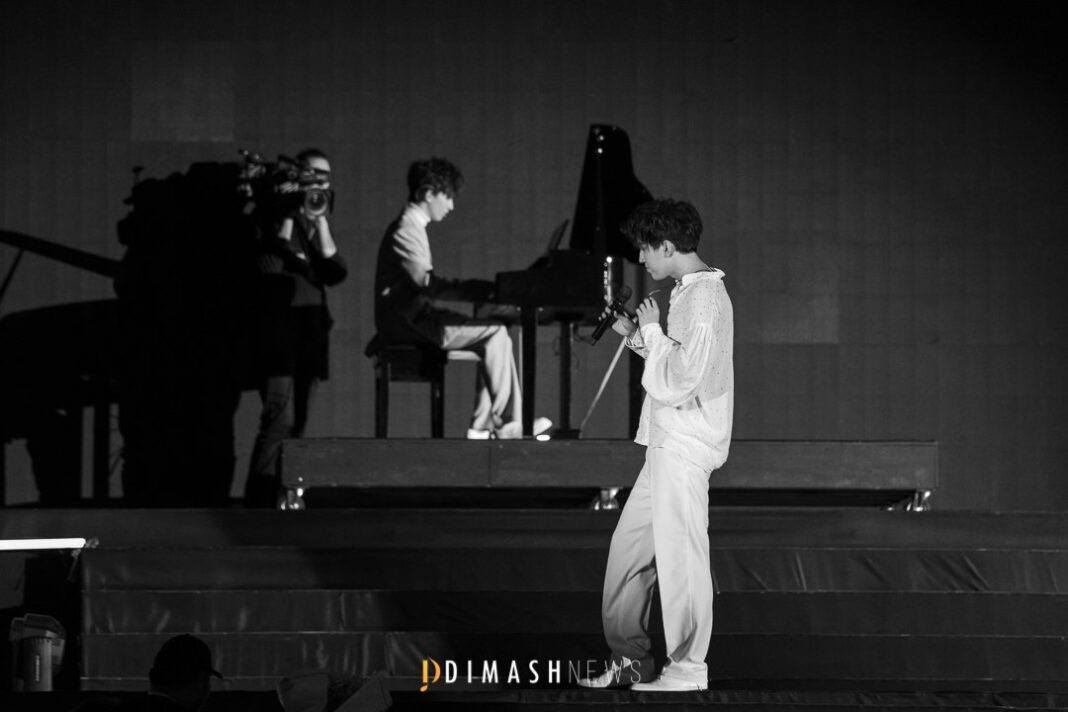 The new composition was dedicated to finding one’s way in the complex labyrinth of life. 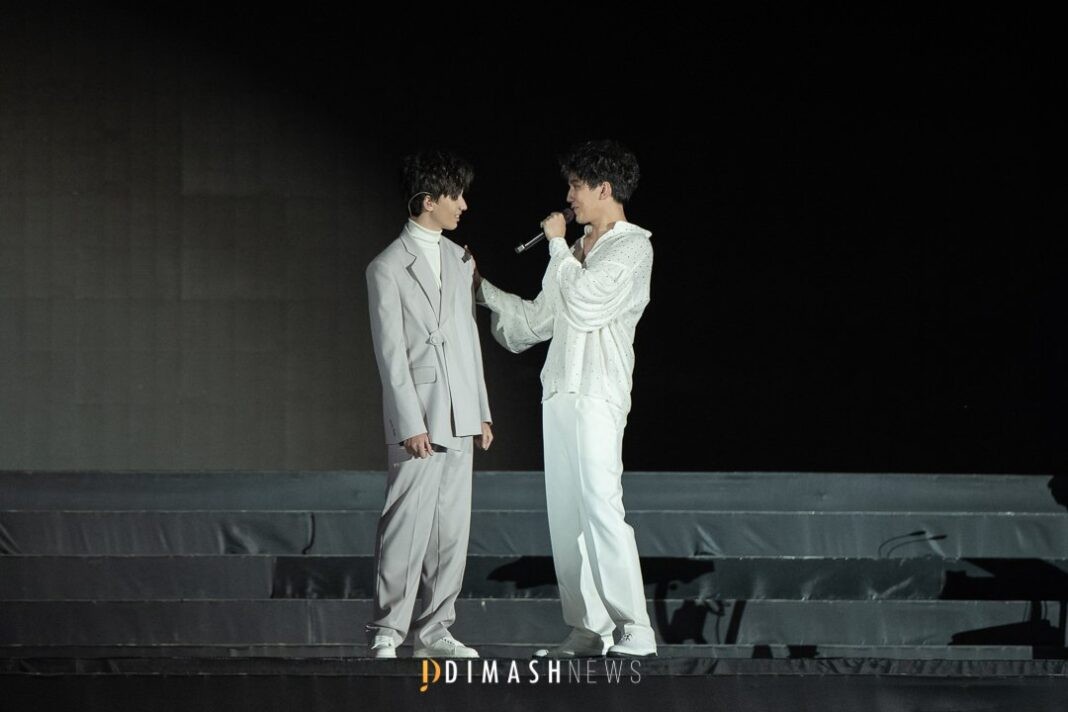 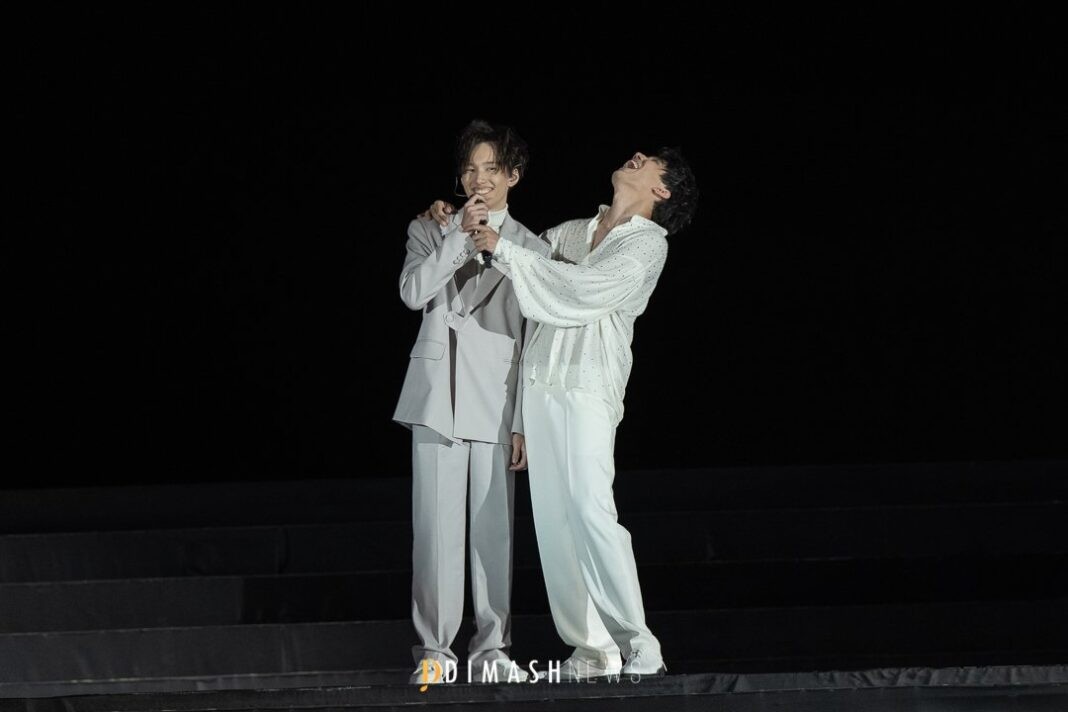 The series of driving songs continued with “Fly away,” which Dimash performed to the accompaniment of author Yedilzhan Gabbasov.

Each artist’s repertoire includes several iconic songs. “Love of the tired swans” sounded in a special way, during its performance, Dimash tried to approach the audience as close as possible to each side of the stage. From the very first note fans sang along to the artist and, of course, in the finale a cappella performed fragments of the composition by Igor Krutoy. 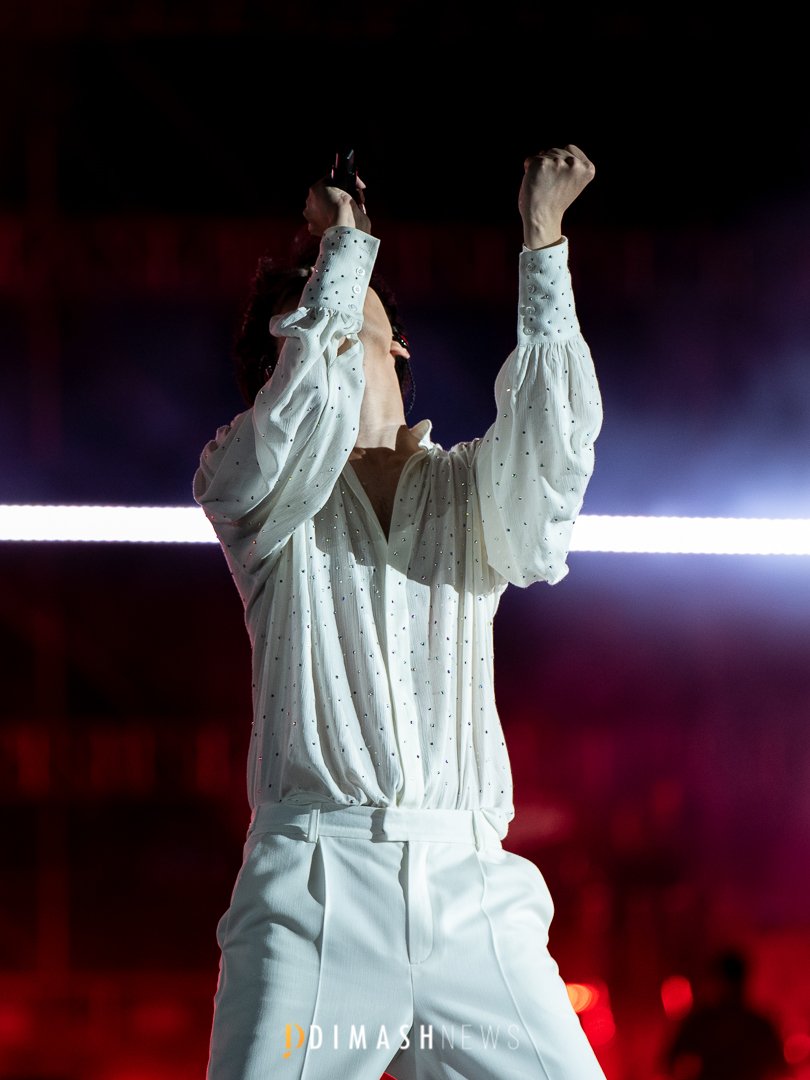 Before the next block of the concert began, Abilmansur performed on guitar a composition by author Renat Gaisin, which was beautifully framed by the voices of backup singers Zarina Bozhakova, Jordan Arakelyan and Rasul Usmanov. 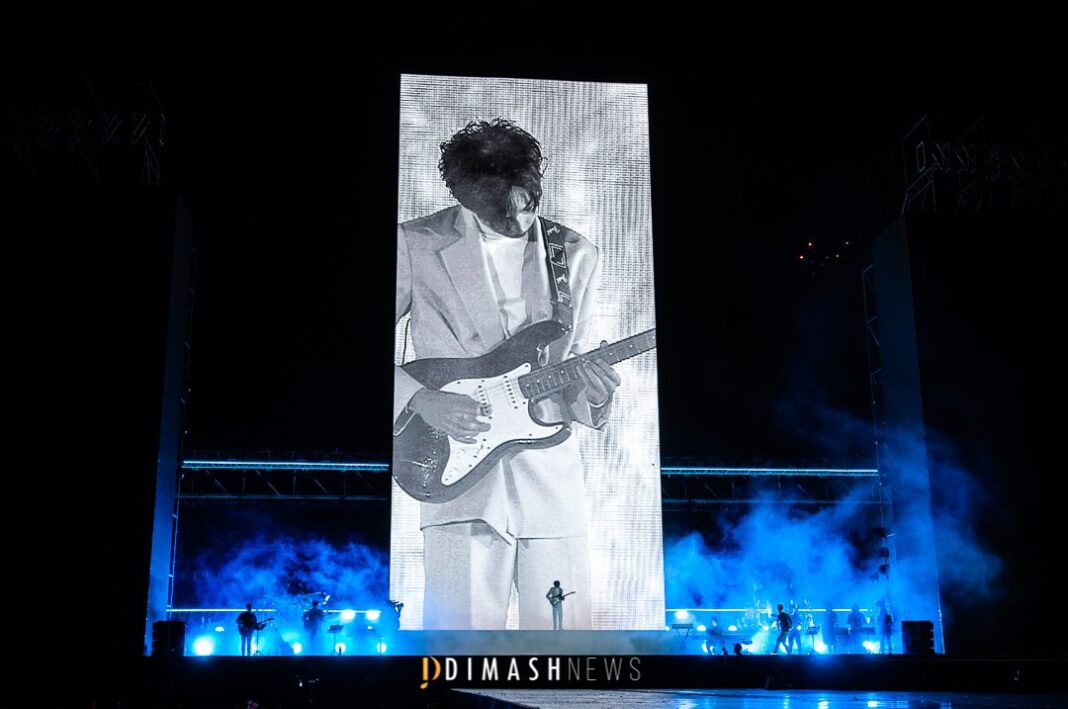 Then the dombra appeared on the stage, and Dimash came out in a costume with national colors. Together with the famous dombrists Temirlan Olzhabay and Yernat Nauryz, Dimash performed the kyu “Adai” and immediately the famous song “Daididau” for himself and Dears.

The national theme of the evening continued with the powerful song “Durdaraz,” which was accompanied by a dance from the Space Machine ADEM team.

When Dimash asked the audience to turn on flashlights on their phones, everyone immediately realized that the next song is “Makhabbat Ber Magan”, a symbol of beauty and light love. Both the artist and the audience were so engrossed in repeating the chorus of the song that they couldn’t stop. 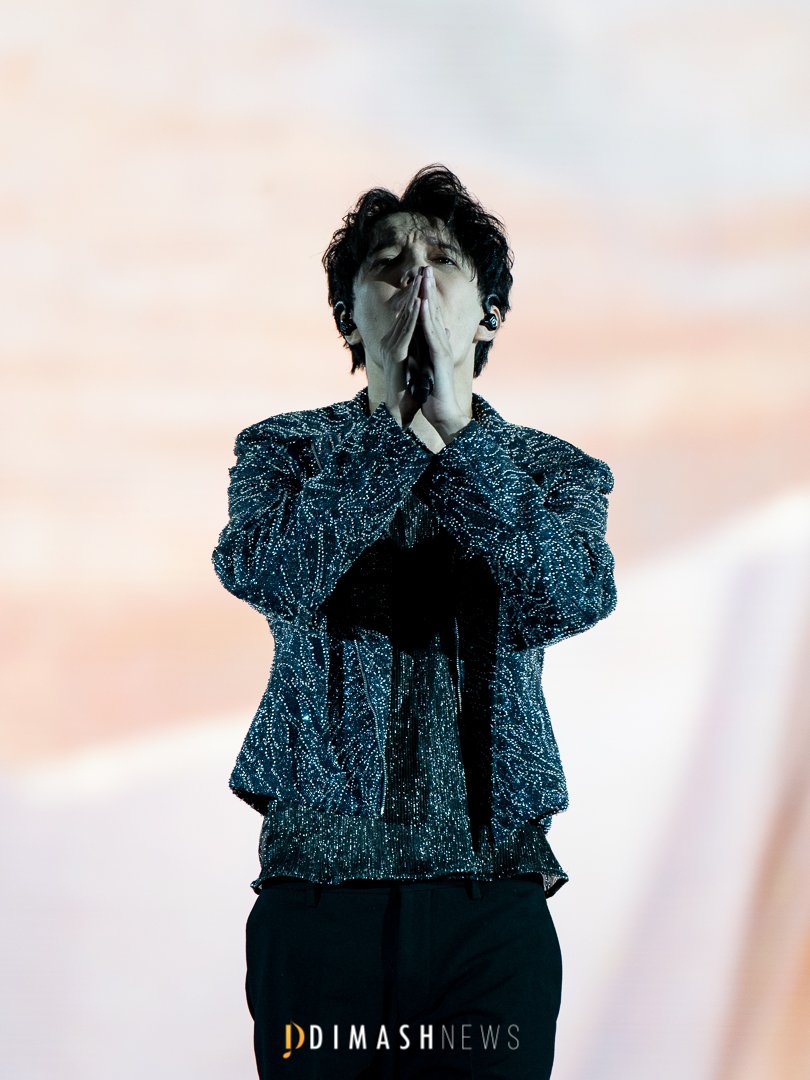 The next guests of the evening were the Kazakh State Academic Orchestra of Folk Instruments named after Kurmangazy and the State Dance Ensemble “Saltanat”. Together with them, Dimash performed the song “Elim Menin”. 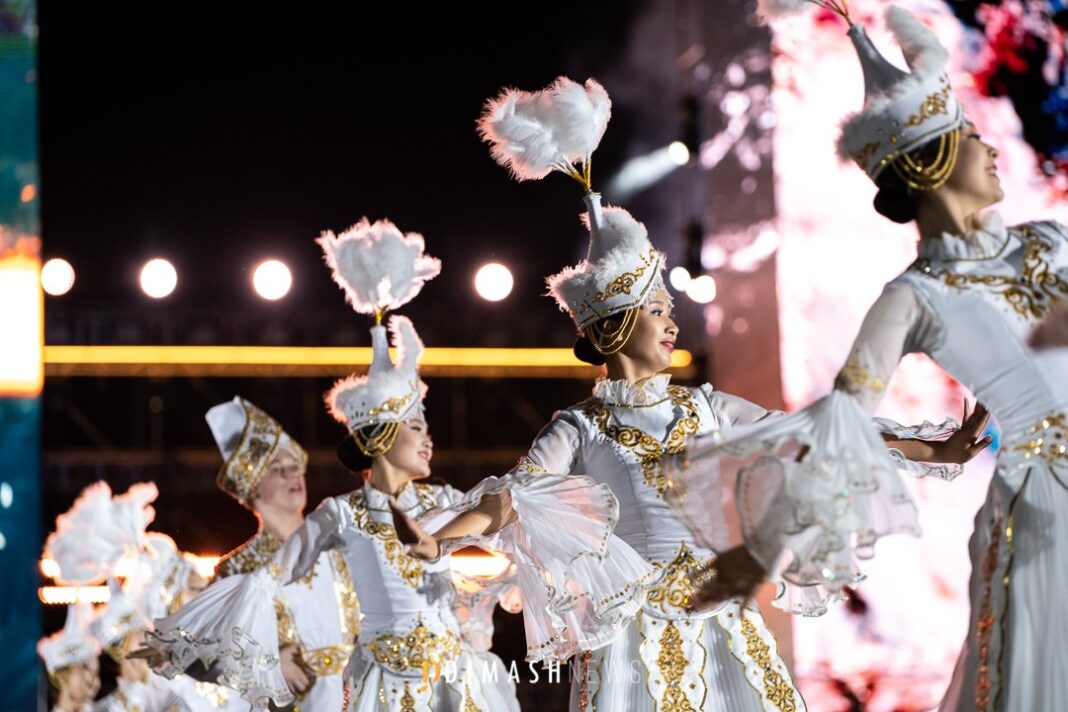 At each of his concerts, Dimash surprises the audience by playing musical instruments, but at the last concert there were several of them. The artist played a shaker, drums, congas, bass guitar, electric guitar, keyboards, and xylophone.

In between the blocks the audience enjoyed a virtuoso dombra medley by Ablay Tlepbergen and Tanat Sadenov. The baton was taken by the orchestra conducted by Abylai Tlepbergen. The powerful sound of the folk instruments covered the whole stadium and delighted the audience. 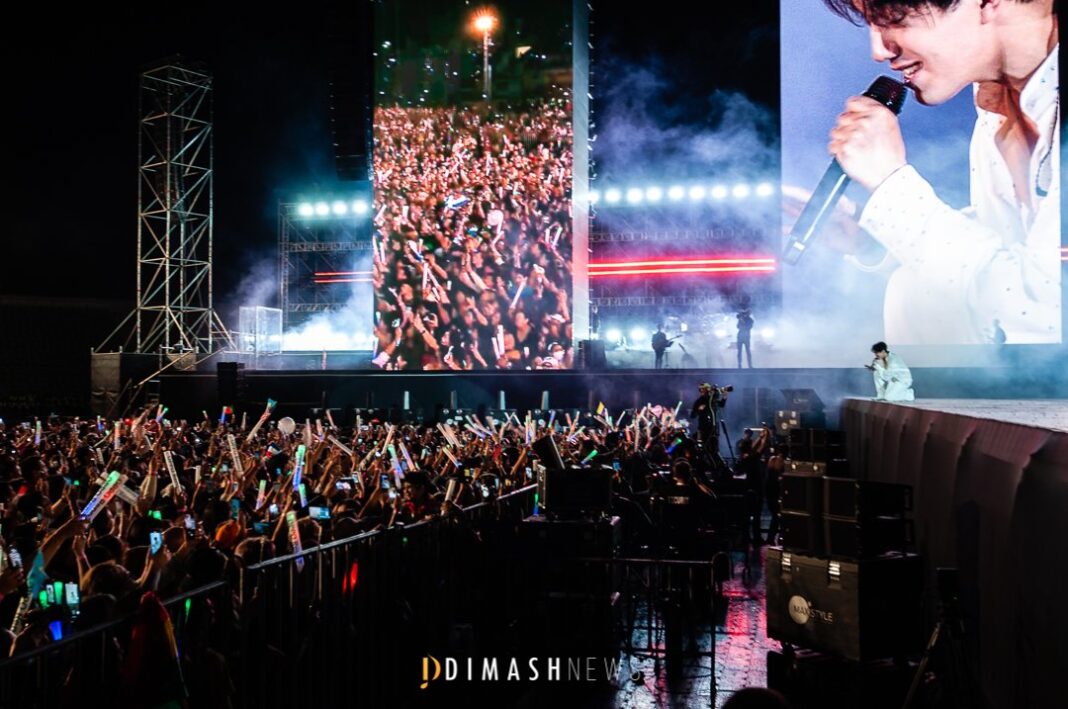 The beautiful legend of the kobyz, told by Dimash’s voice, created a prehistory for the next song “Stranger”, the kobyz in the hands of Olzhas Kurmanbek sounded powerful and deep.

The finale of the concert was approaching, and the audience was waiting with bated breath for the premiere. Requiem. “The Story of One Sky”: a comprehensive, immense work in terms of the vocal techniques and musical lines used. The music video for the new song is scheduled to premiere today, September 24, at a fan meeting with the artist. 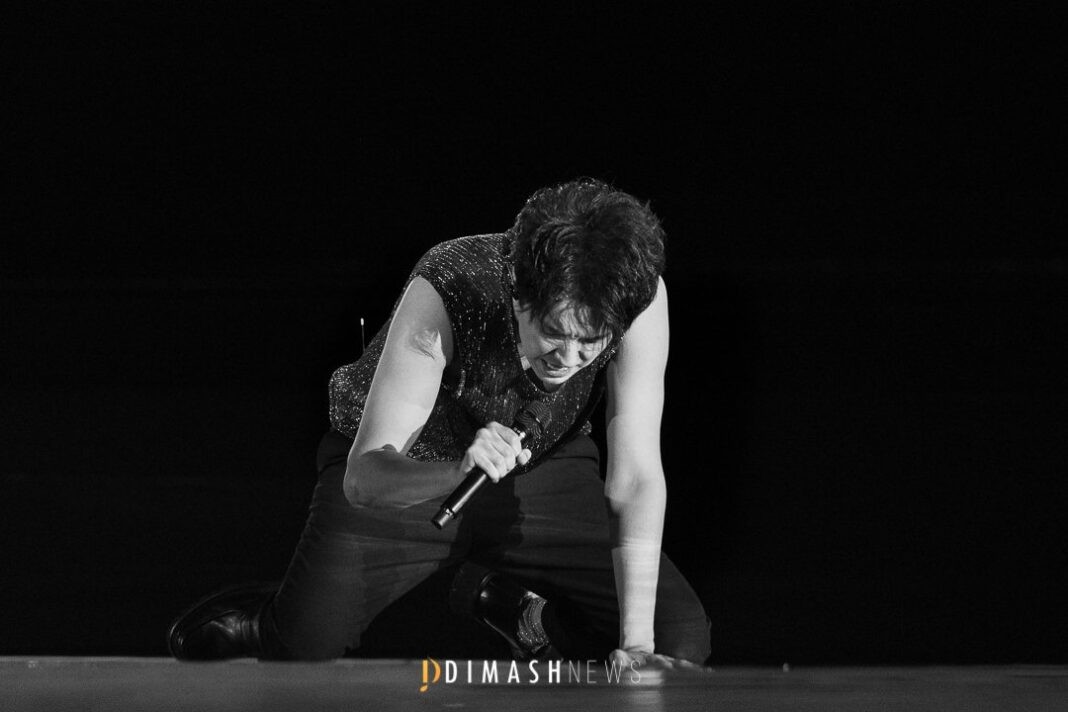 Another premiere – a song in Spanish mesmerized by its presentation. Four Dimash on stage – three in the form of a hologram and one real – looked very beautiful, and Dimash’s voice in each hypostasis sounded different and created intrigue. Read the interview with the authors of the song in our next material. 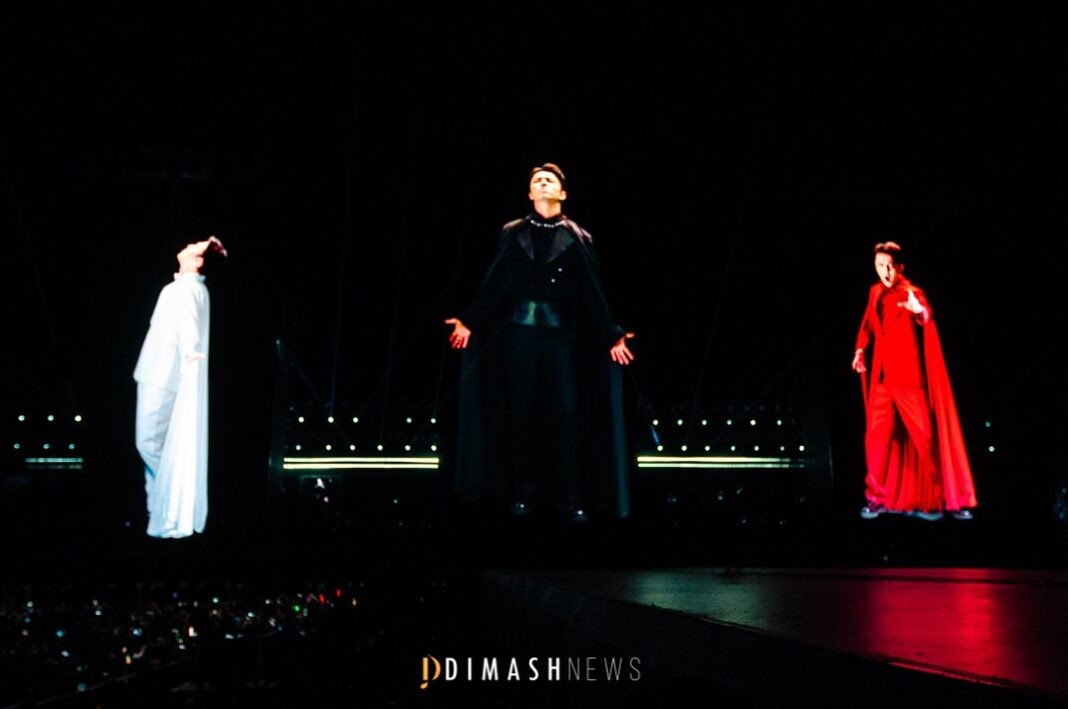 “China. I am a Singer” project,” recalled Dimash before the next number. Dears favorite song not only from China, but from all over the world – a love melody “Autumn strong” was accompanied by the sound of the violin and a declaration of love from the artist to his fans. 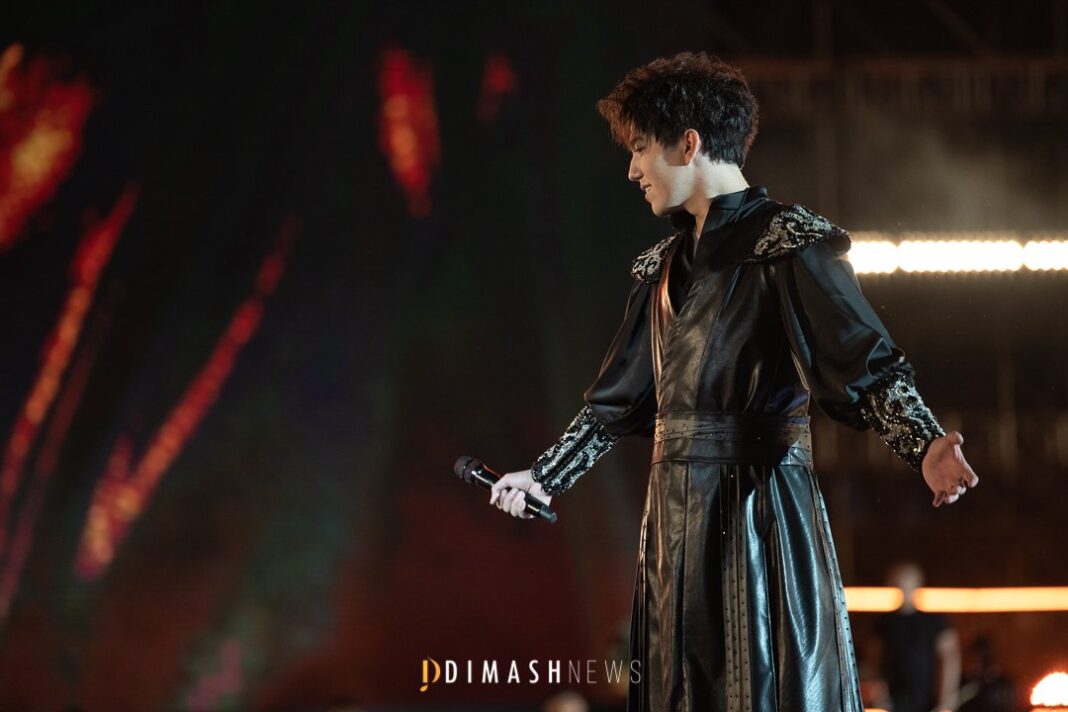 Then composer Renat Gaisin appeared on stage at the piano. Dimash sat down next to him, and the kobyz sounded. And time went back to the sad years of the pandemic, when Dimash and Maestro worked together on the song “Qairan Elim”.

In the ending of the concert by tradition in one song “Screaming” Dimash had time to sing, to present the team, to welcome fans of his creativity on a fanzone, to arrange a battle on drums with Ilya Pokrovsky. And the final song “Just let it be” told everybody, that there will be a lot of new meetings and pleasant memories.