The Lines of Prosperity: Kazakh minimalism and academism in a new exhibition

The Lines of Prosperity: Kazakh minimalism and academism in a new exhibition

“Kazakhstan has what it takes to give the world a new style,” a conceptual exhibition representing three generations of artists opens in Nur-Sultan.

On April 27, the vernissage of the exhibition “The Lines of Prosperity” was held in the metropolitan gallery SAL-SERI. Authors Nurai Medeuova, Arystan Smagulov and Armat Bektas dedicated it to the 30th anniversary of Independence of the Republic of Kazakhstan. According to the hosts, the exhibition reflects three different views on space, color and sacred meanings of the Kazakh culture. 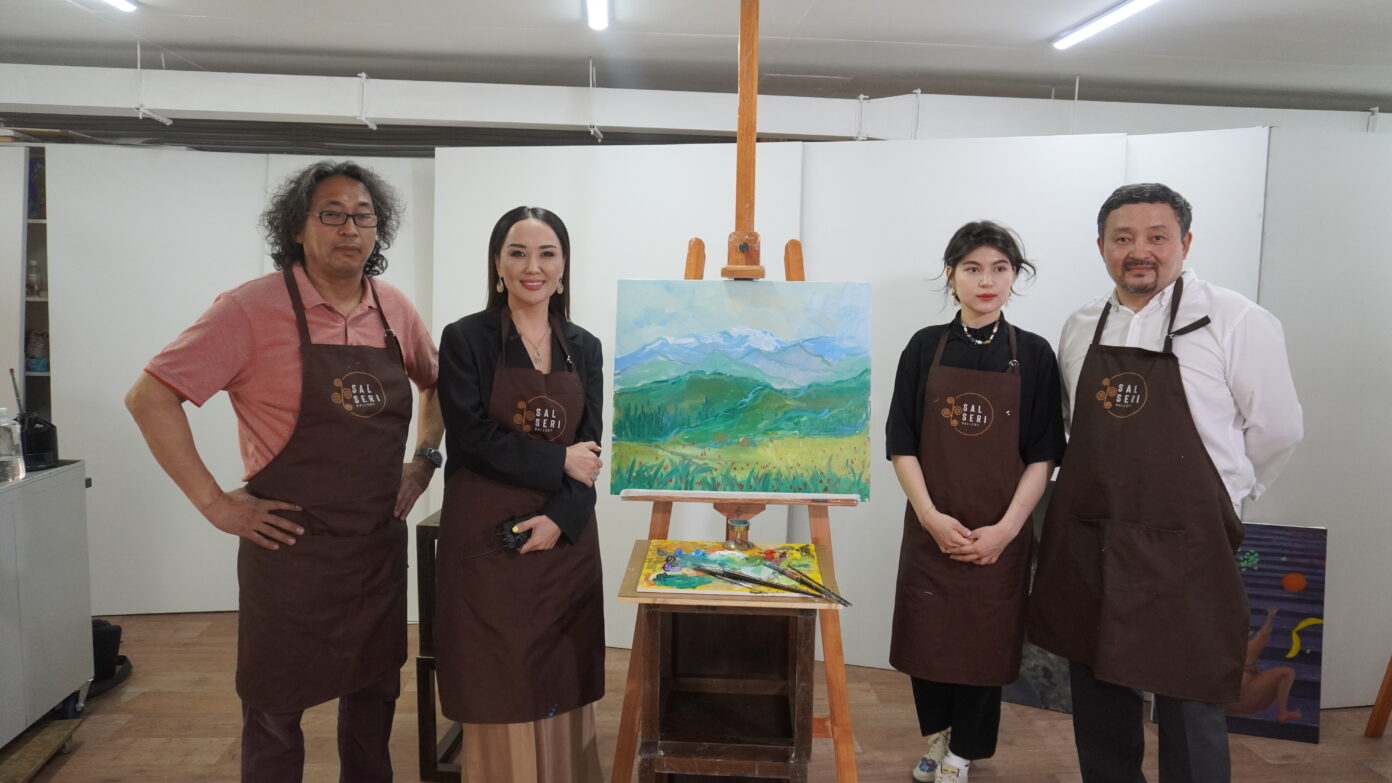 The exhibition opens with a true-to-life painting by Arystan Smagulov. His landscapes and genre work of art are filled with the joy of being, the air of the Kazakh land, the energy of color and motion.

A member of the Kazakhstan Union of Artists, Arystan Smagulov has been taking part in city, national and international exhibitions and teaching easel painting at the Kazakh National University of Arts for nearly two decades. 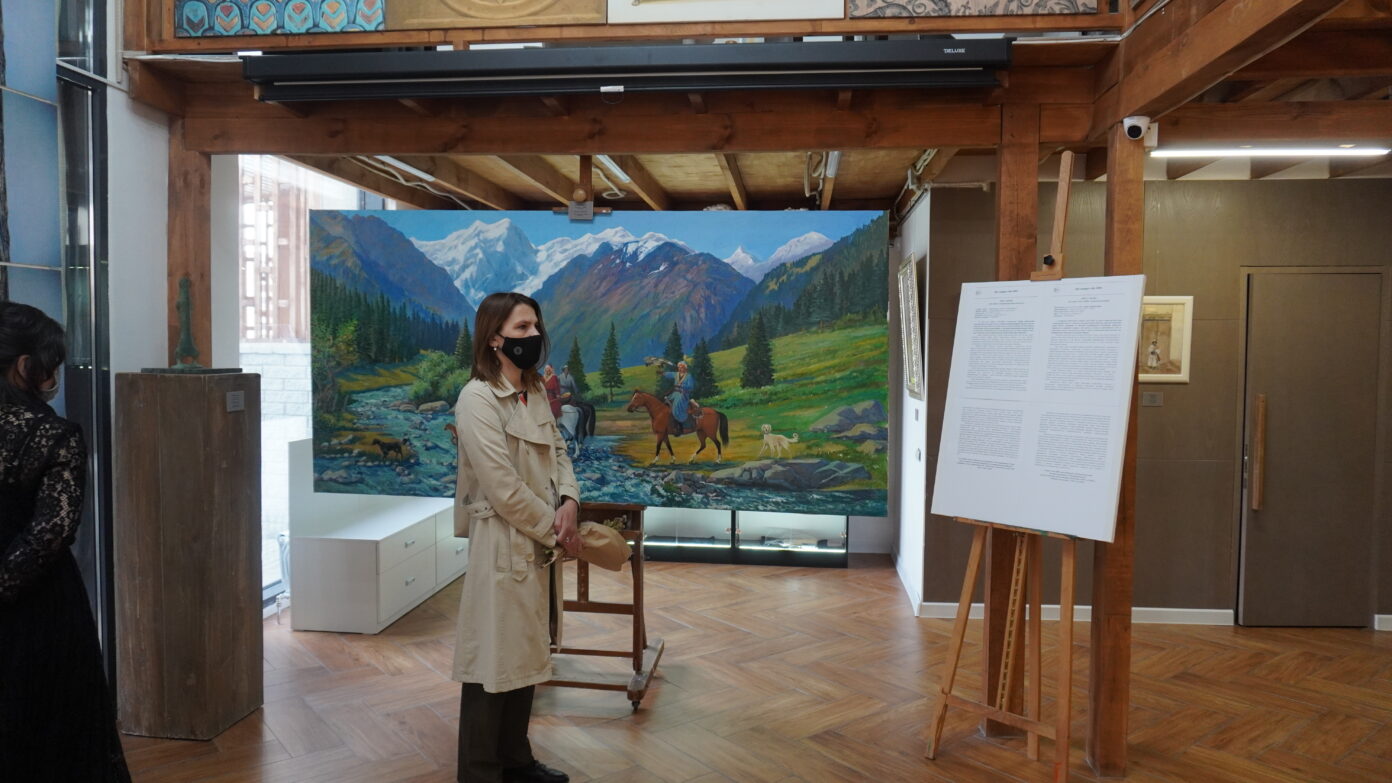 “Thinking about the new exhibition,” the artist says, “Nurai and I came up with an idea that there’s something we want to do with our Kazakh spirit because no-one is going to develop our national art for us.”

Arystan Smagulov explains how the logic of the exhibition was conceived. His realistic works show Kazakh culture, land and landscapes. Nurai Medeuova presents the history with a more contemporary look – the pain of the Kazakh people, the Holocaust and wars. And Armat Bektas and his lines represent the future.

Nurai Medeuova, head of the SAL-SERI gallery, developed an interest in drawing when she was school girl with Arystan Smagulov being her mentor. However, unlike her teacher, her paintings gravitate toward abstract expressionism and reflect the young artist’s desire to feel the spirit of Kazakh culture and comprehend the history of her people with a modern figurative language in her work.

According to Nurai, it took more than three weeks to prepare the “The Lines of Prosperity” exhibition. And the idea of it arose after the young artist had met the already famous painter Armat Bektas. 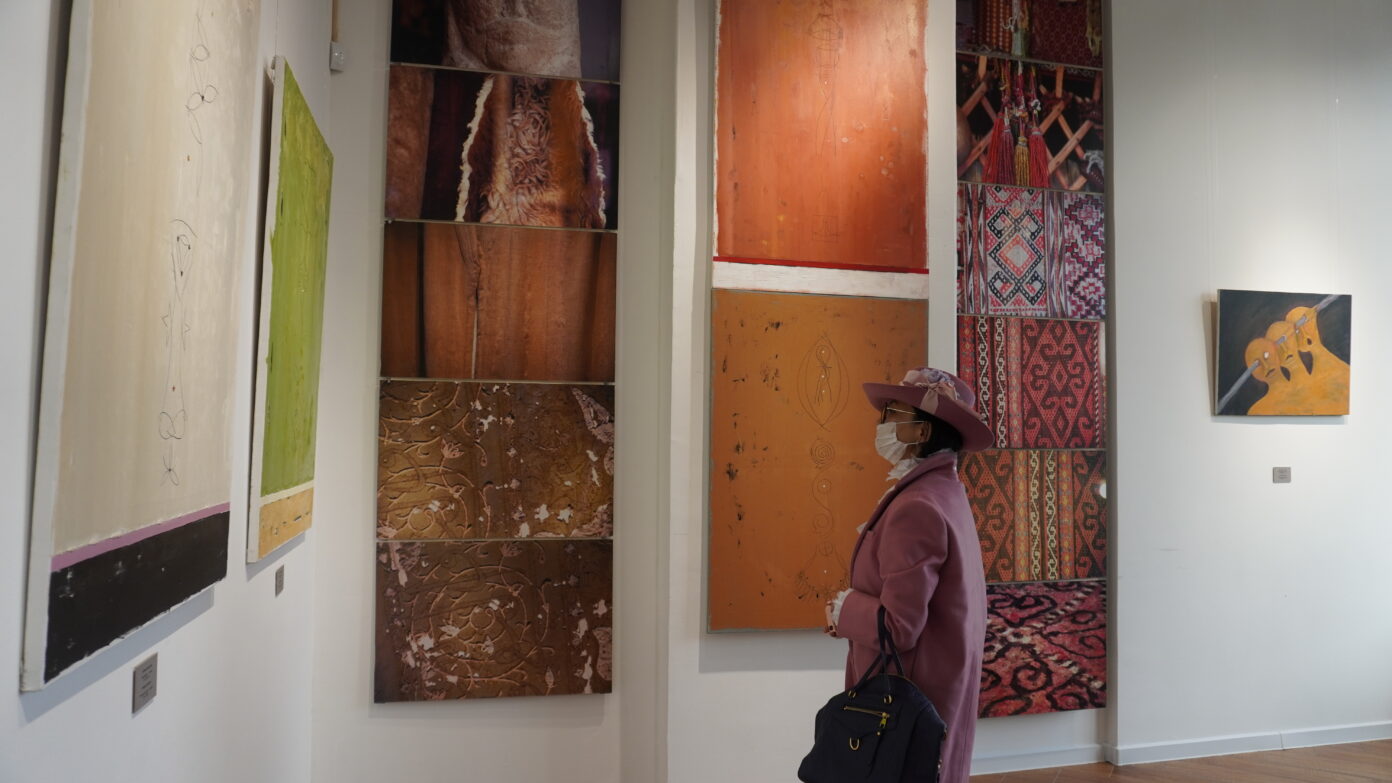 – He was talking about his concept of lines, which he had been working on for quite a long time. This was the basis for the title “The Lines of Prosperity”. The linear style is attractive first of all due to it is minimalism, and the fact that you can express basically anything you want with it,” Nurai says.

Notably, this was the night when Nurai Medeuova joined the Nur-Sultan Union of Young Artists. The young lady was awarded by Omirali Ismailov, the chairman of the City Union of Artists. 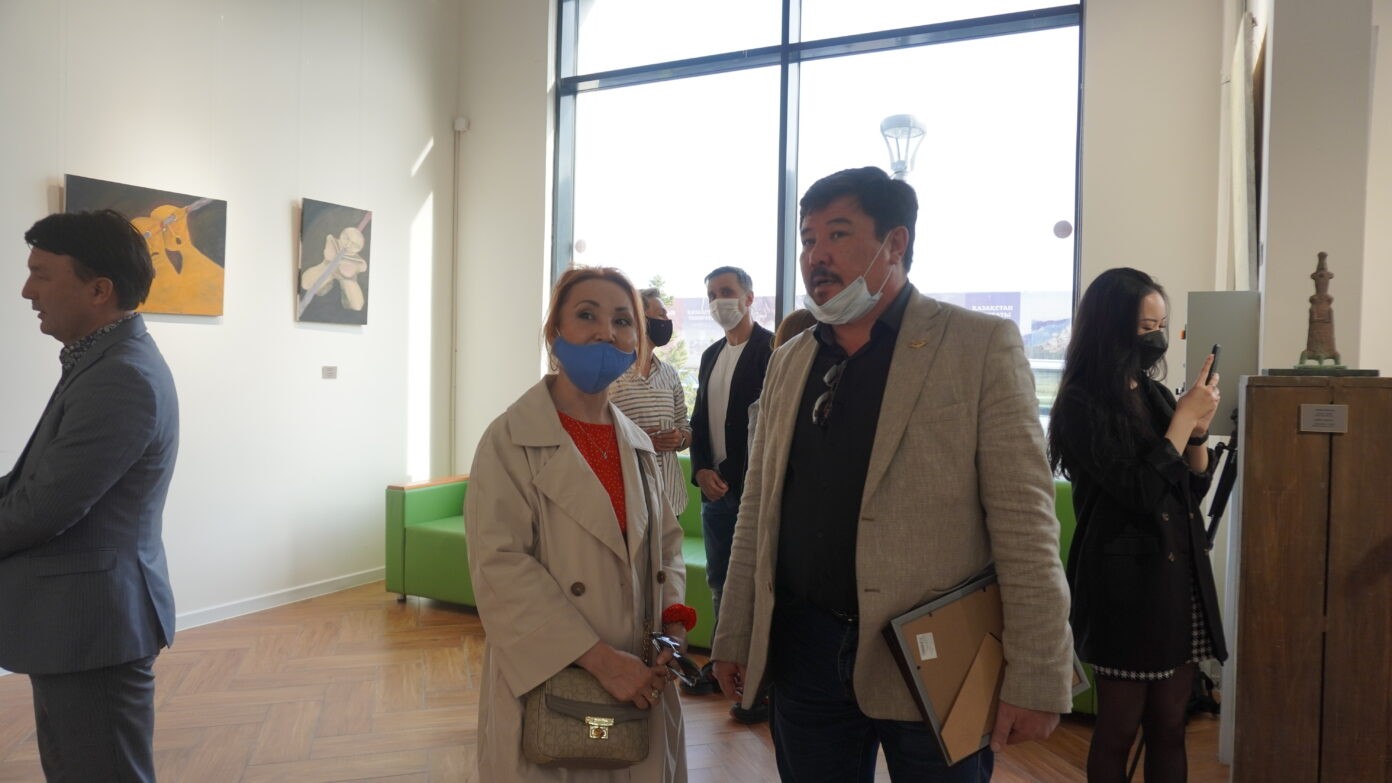 The work of the other exhibitor, Armat Bektas, is known not only in his homeland. His pieces of art are displayed in museums and private collections all over Kazakhstan, USA, Netherlands, France, Italy and Russia. For a long time, the master had been searching for his signature language that could most accurately convey the philosophy of the steppe culture. According to him, he began to develop the concept of lines in 1996-1997. 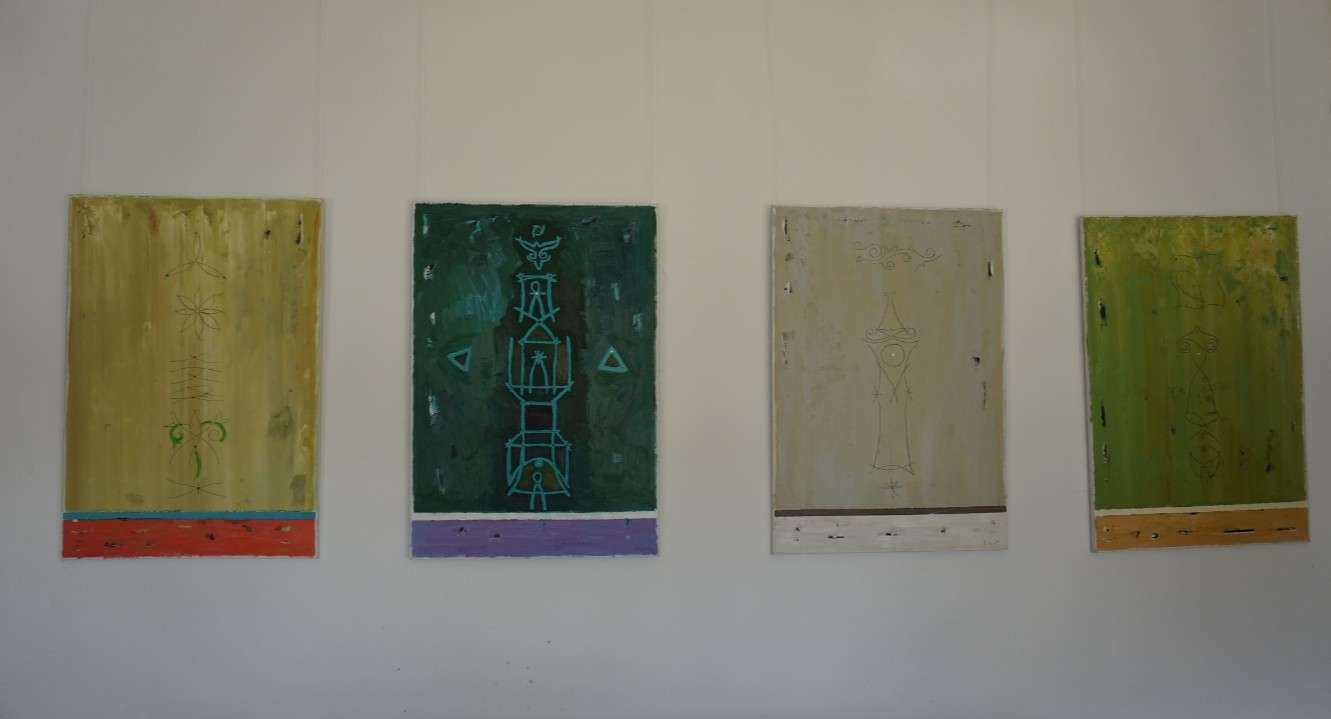 – The walls of almost every Kazakh house are decorated with paintings of horses and yurts, and what we really need is a new national style. The line is tolerant, it has a lot of forms. Every nation can picture itself in a line. I would also like to recreate the cult of symmetry because with symmetrical paintings on the walls, a man can become complete and peaceful.

Armat has spoken about his concept of lines in various countries of the world, participated in international summits where his ideas were supported by environmentalists.

– Therefore, I think that we, Kazakhstan, have what it takes to give the world a new style. Time will tell if it reaches success or not. But I am happy that SAL-SERI gallery comprehended and accepted my idea,” Armat Bektas shared.

Among the guests of the vernissage was Kanat Aitbayev, head of DimashAli creative center. He expressed his kind words to the participants and organizers of the “The Lines of Prosperity”. 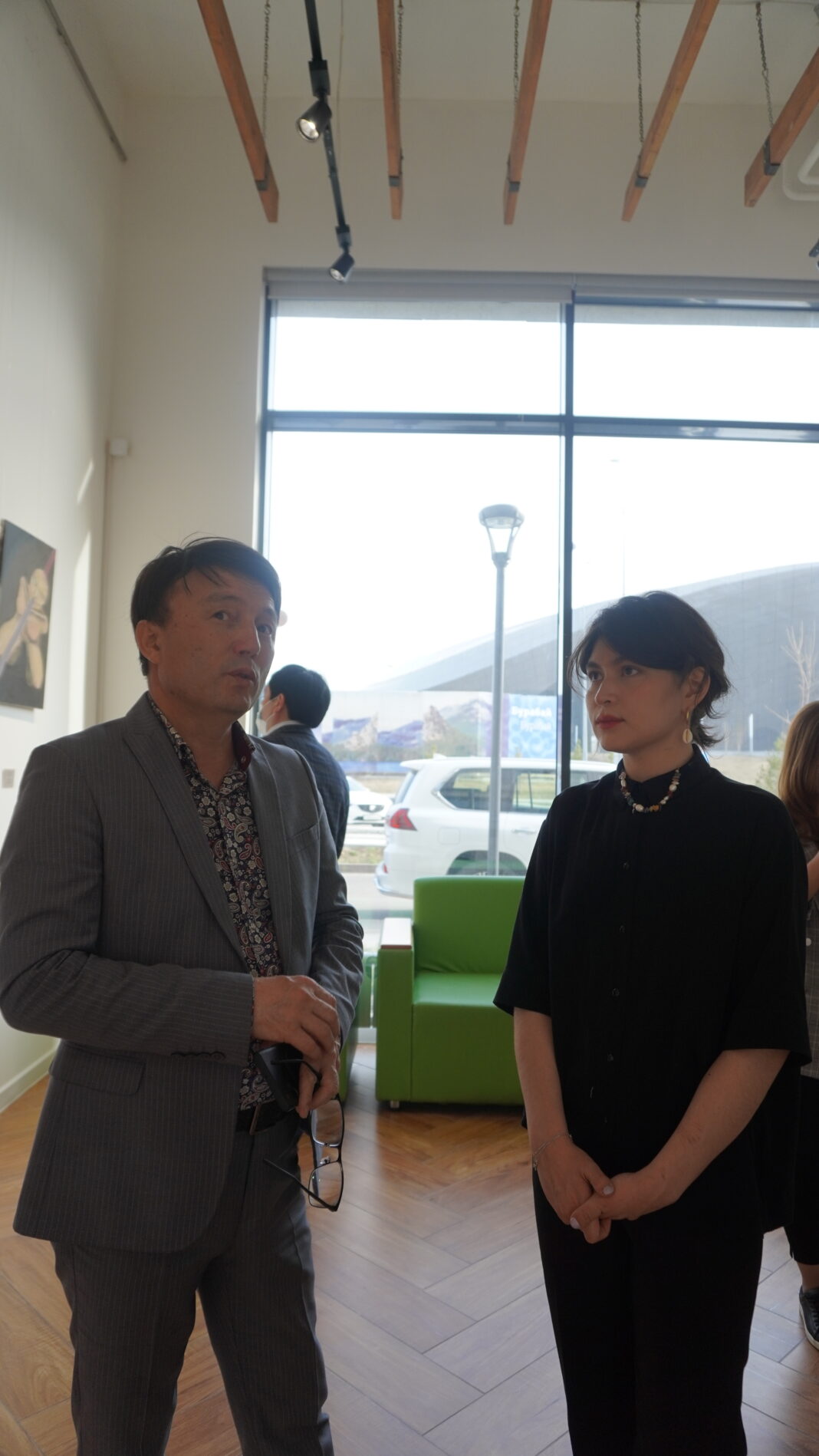 – We discussed with the other guests that this beautiful exhibition stirs the blood and has an incredible effect on us. Philosophical ideas are evident in the paintings. Such a beautiful night could actually be called a celebration of art that will leave a lasting impression,” Kanat Aitbayev says.

According to the hosts, exhibition “The Lines of Prosperity” will be open to public not only in the capital of Kazakhstan. It also plans to travel to the neighbouring countries and further abroad.