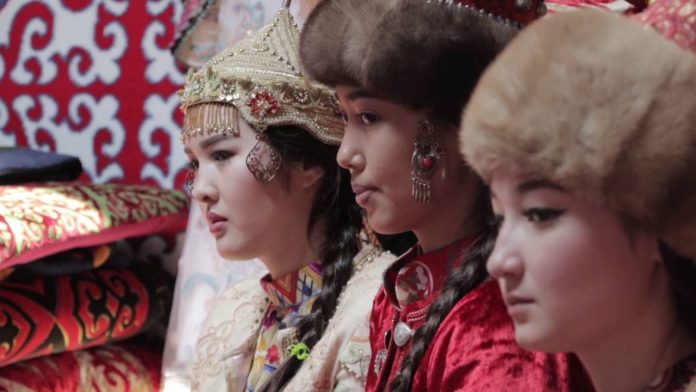 In ancient times, among the Kazakhs, clothing, in addition to its main function to protect a person from the external influences of nature, carried a certain information. Depending on the geographical residence or birth, the shape, ornament and even the fabric of clothes differed.

The main thing in the image of the bride was a headgear called saukele. A high cone-shaped headgear, always adorned with precious stones, trimmed from below with fur. Ethnographers note that the decoration of the saukele depended on the financial situation of the bride’s father. Thus, girls from wealthy families wore saukele decorated with gold, silver. Its base was made of velvet or finest silk.

And the inner cone was made of specially made snow-white felt. By the way, the height of the cone also depended on the position of the bride’s father. The richer and more authoritative he was, the higher was the cone.

Let’s take the saukele from the film “Kyz Zhіbek” as an example. The film included in the golden fund of Kazakhfilm shows a classic saukele. And the moment when Tolegen dies, the saukele floats on the river. It has a great meaning. This way the filmmakers metaphorically conveyed the significance of the saukele headdress exclusively for brides.

There is an interesting version of the origin of the word saukele. According to which, saukele is a derivative of sau kele ma?, which translates as “will she arrive in one piece? “. In those days, there was no transport connection, as it is now. People traveled exclusively on horses. And the trip to the bride’s village took many days, weeks, and even months. No less long was the return trip. Therefore, people looked forward to those who left for the bride anxiously and impatiently. In addition, wedding caravans were often attacked by robbers who roamed the steppes, as they usually returned with gifts from the bride’s relatives. Robbers seeing a wedding procession, could take away gifts and even saukele. At a distance of one drive of flocks, a caravan was usually waited by teenagers and horsemen. And when they saw those returning in health and with gifts, they galloped to the village with good news: “Sau keledy! or She will arrive in one piece!”

The girl put on saukele, as a rule, only once, when she got married. According to historians, in some areas there was a tradition of wearing saukele until the first-born or during the first year of married life.