Many dears will agree that after their first acquaintance with the work of Dimash, they will spend a few months fully immersed in the search for information about the artist.  When the coveted word “Dimash” is entered into the search engine line, the Internet helpfully throws up a lot of video clips, articles, groups in social networks, all related one way or another to the young Kazakhstani artist.  All resources are interesting in their own way, because they are aimed at introducing people to a musical phenomenon named Dimash Kudaibergen. 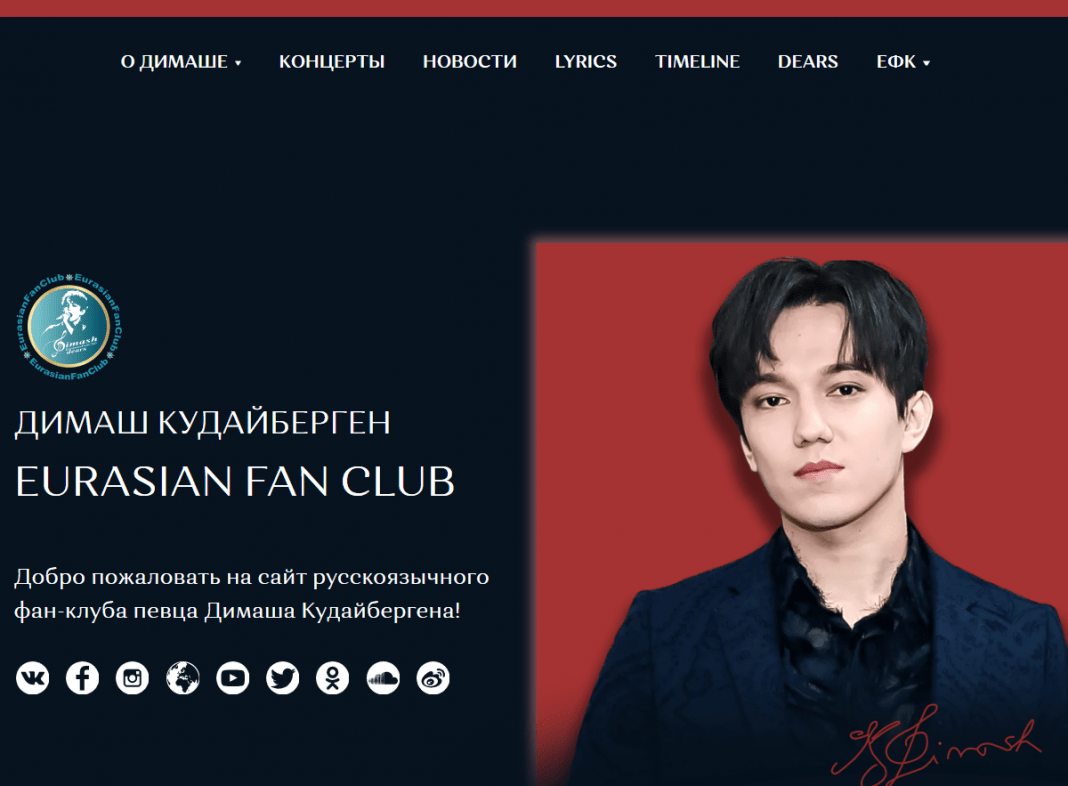 Likewise, Dimash’s fans from the Eurasian Fan Club (EFC) have been working in all the social networks around the world for four years, but it is only recently that they have had the opportunity to create their own website dedicated to Dimash and everything related to his work.

Friends, we offer you a short tour of the website: https://dimash-efc.ru/, which contains current and archived videos, news content, as well as exclusive materials from the EFC creative team.  We hope that each of you will find something new and interesting here for yourself.

Dimash.  What is the most important thing for a singer?  Of course, his music: the album “iD”, recordings of the numbers of the solo concert “Bastau”, clips, music videos, sound tracks.  All these official recordings can be watched and listened to by following the links directly from the site page.

Are you planning to buy a ticket for a Dimash solo concert, or an event with Dimash’s participation? No need to look for information on the Internet, which is sometimes not reliable.  Just follow the links on the site that lead to the official ticket sellers. 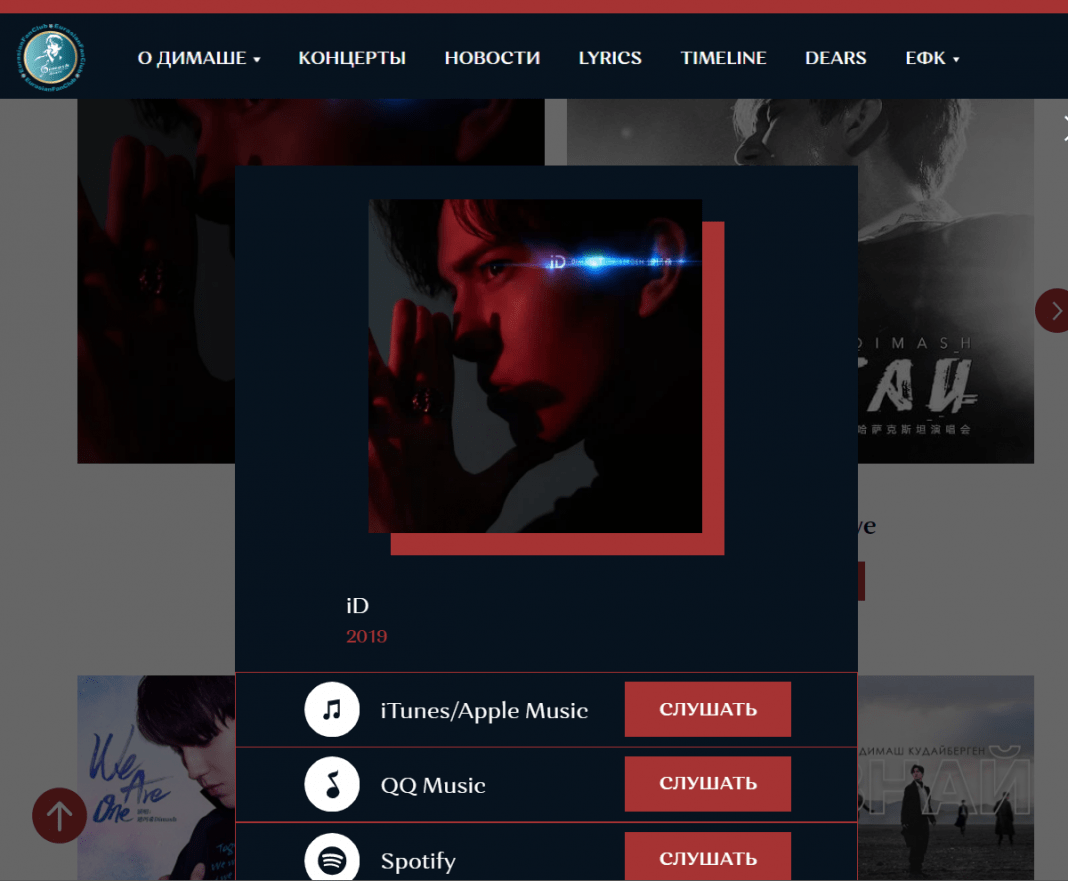 Biography.  Despite the fact that Dimash is very young, his life since childhood is replete with significant events. To describe it in full, you probably need to write a book.  Perhaps the singer’s fans will someday take on this difficult task.  But for now, you can read on the EFC website about Dimash’s main life stages, which played a big role in his formation as an artist. 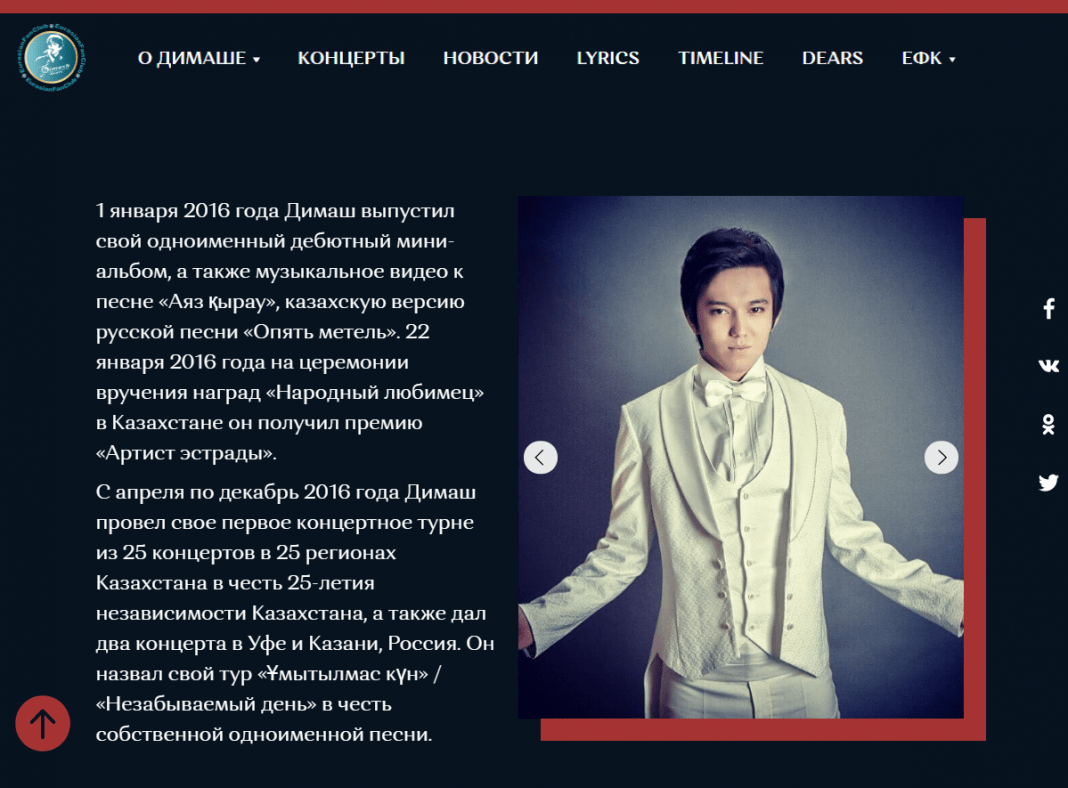 Awards.  Little Dimash won his first award at the age of 6.  It was a victory in the republican children’s competition “Ainalayin” in the “Piano” category.  Since then, a series of awards and prizes at various competitions, ratings, and festivals have studded the artist’s career. 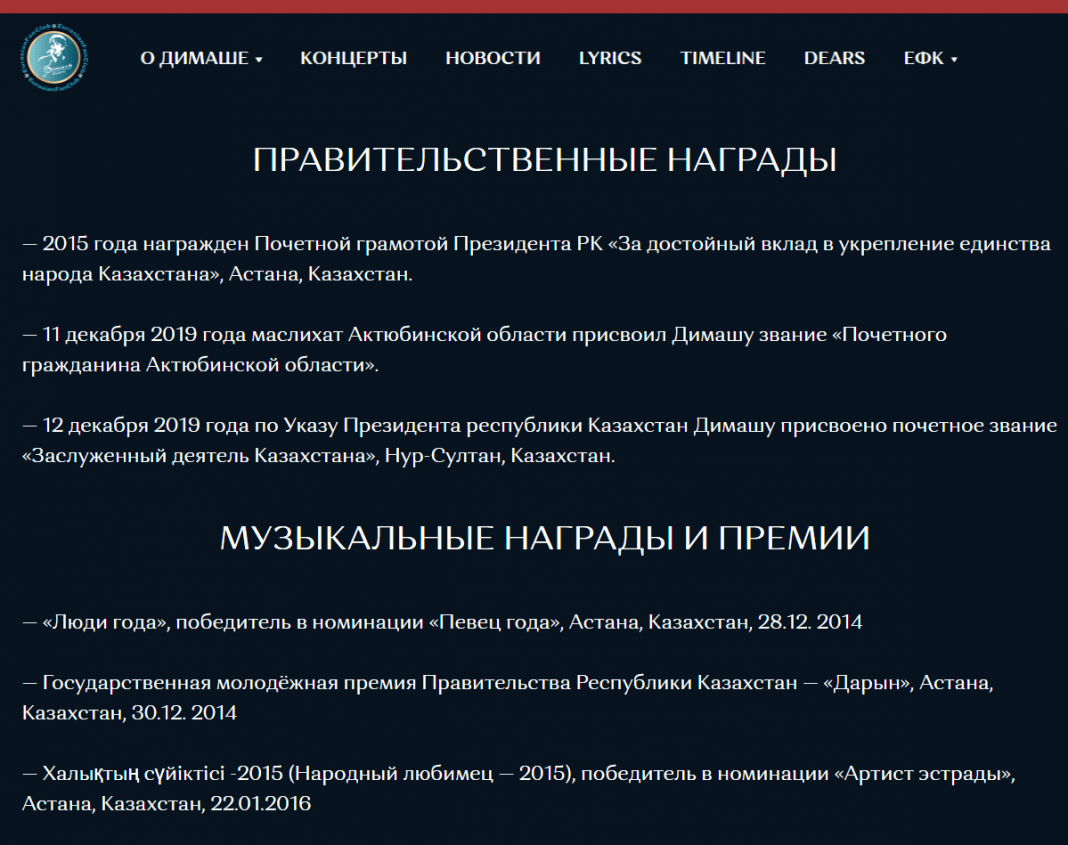 Many dears from EFC were lucky enough to attend Dimash’s solo concerts.  Bastau, D-Dynasty, Arnau — each of these enchanting shows will forever remain in the memory of the viewer.  Based on the official data and feedback from fans, the EFC editors describe the unique atmosphere reigning on stage and in the hall when Dimash sings.  For those who are not lucky enough to attend all of the artist’s concerts, the site contains the best photos and fancam video clips.  Many of them were filmed by a team of EFC representatives from Moscow – the Moscow Dears. 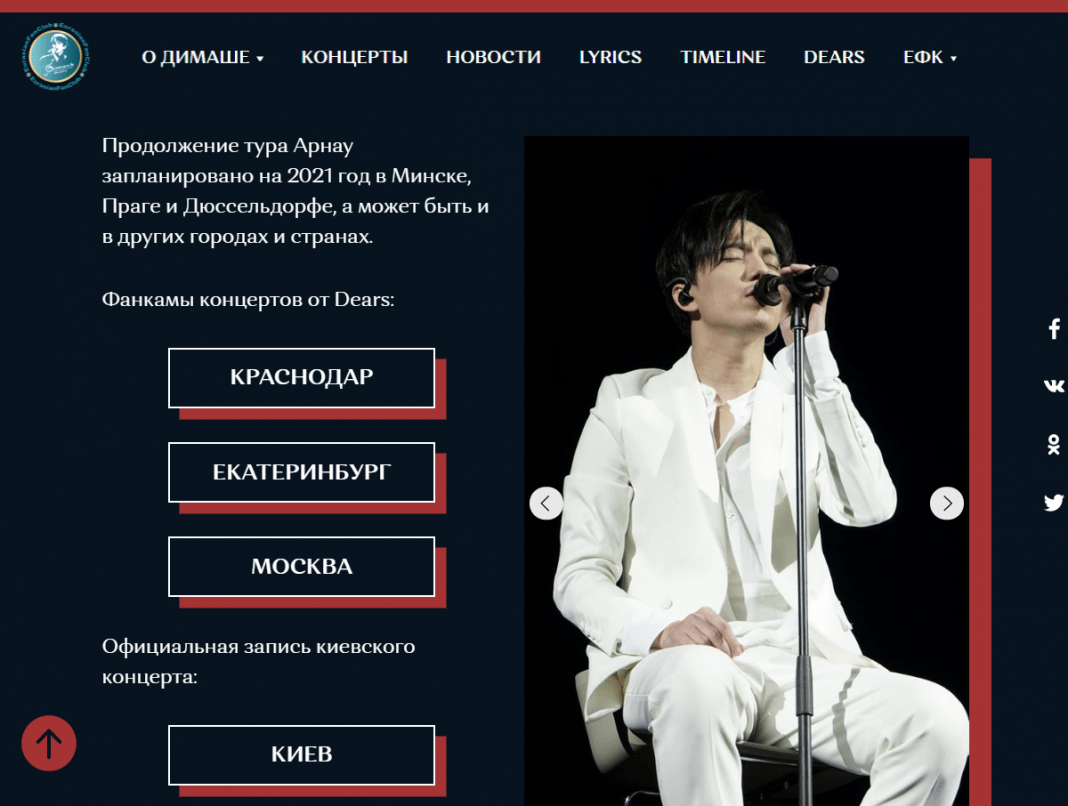 All major events taking place around Dimash are posted on the site categorized by year and by the type of material presented.  Here you will find interviews, articles, reports, television recordings, and reviews about Dimash, as well as articles on the people and events accompanying his creative life.  All information contained on the site is exclusively from reliable sources. 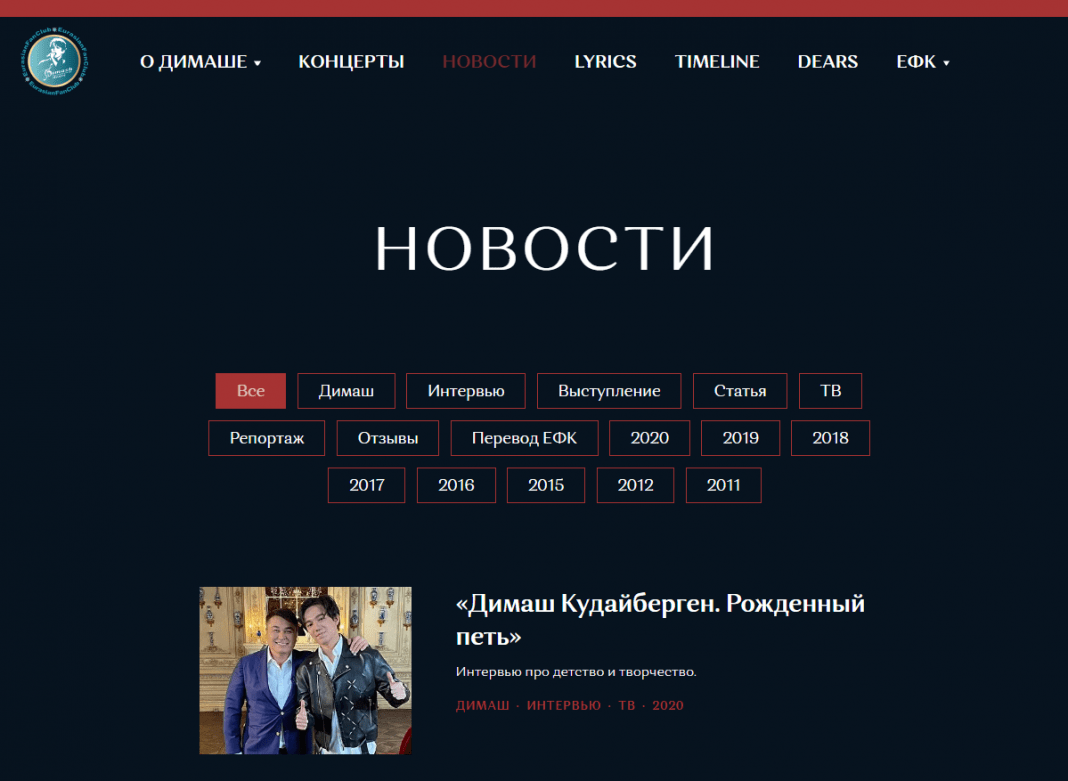 In each of his songs, Dimash puts a special, soulful and very precise meaning.  Therefore, his fans are always interested in what the artist is singing about, what is the history of the song’s creation, who are its authors.  Since Dimash sings in different languages, it is quite important to choose the correct translation so that the inner world of the song, its essence and the emotions that the artist puts into performing it, become as clear as possible.  Dimash has sung a lot of songs already, and translations require painstaking work, so this section of the site will be replenished with ready-made translations on an ongoing basis. 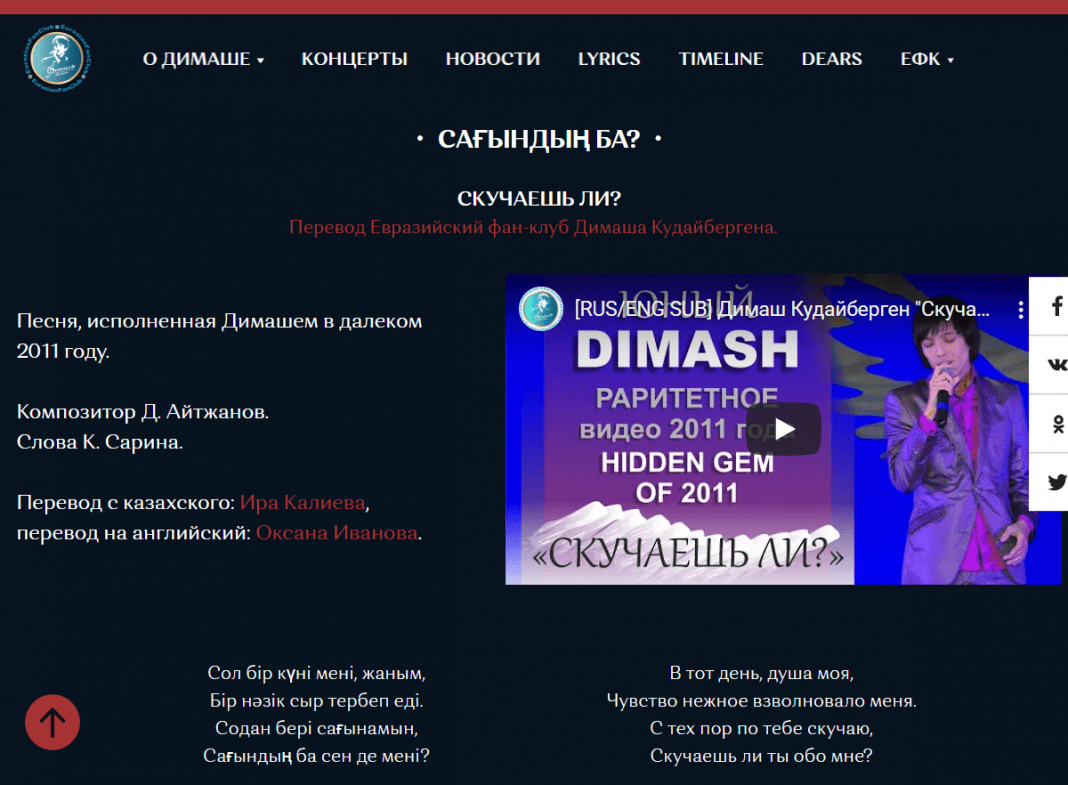 If you want to access information about Dimash in real time, or find events that have already taken place, you just need to go to the section of the site dedicated to the chronology of all significant events, one way or another connected with the name of Dimash.  To learn more about the event, just follow the active link and you will be taken to the official source of information. 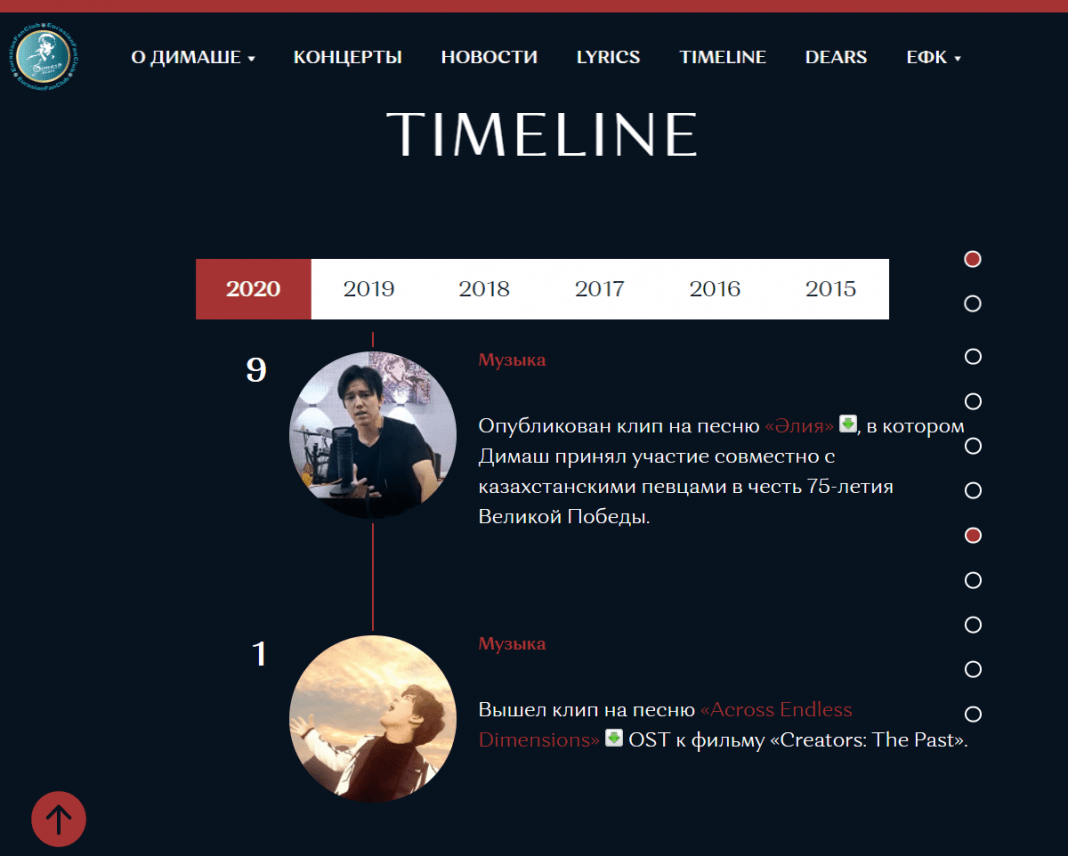 How the name of the Dears fandom appeared; when and under what circumstances the communities of Dimash fans were created; how they rallied into a friendly team, the Eurasian Fan Club; all this can be found in the section of the site dedicated to the artist’s fans.

In a separate video, created for the fourth anniversary of the EFC, you can follow the history of the club itself and learn about how this large Dears community lives.  https://youtu.be/vKHdug1qfxk 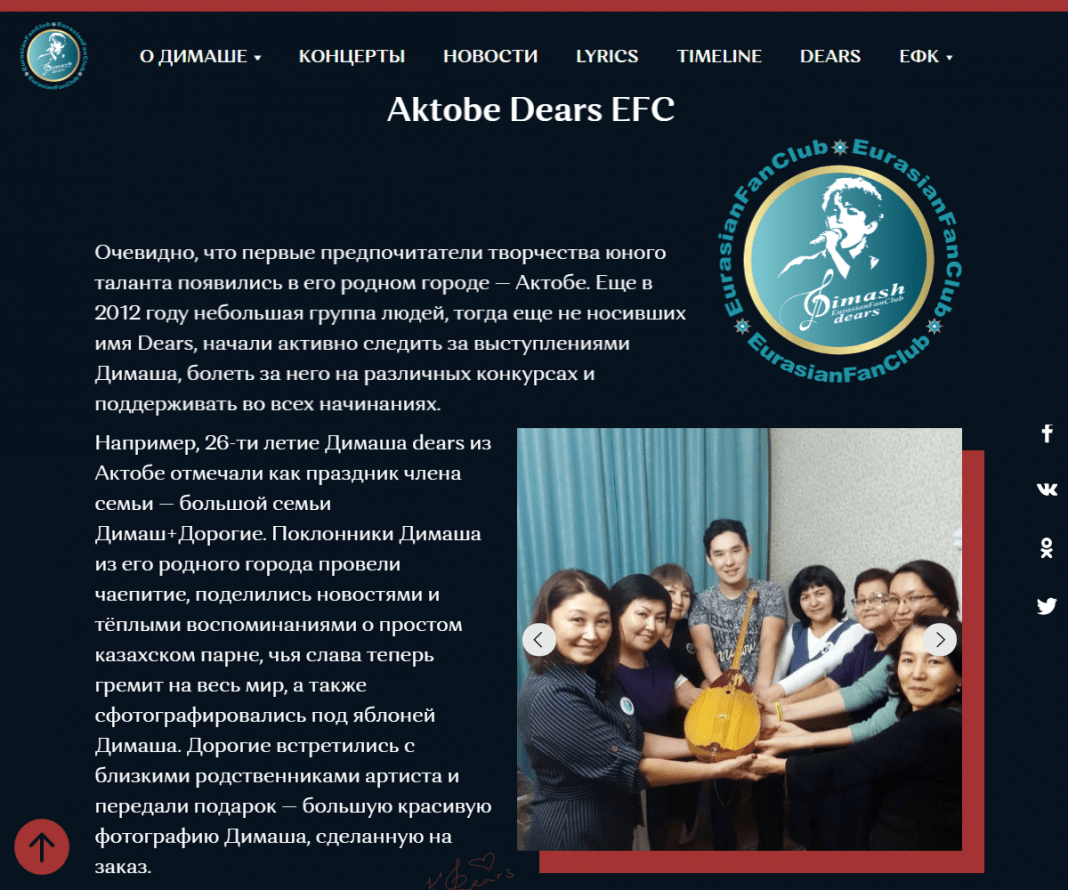 Interview.  EFC tells not only about Dimash’s work, but also about the professionals who work with him, about the projects in which he participates.  Most of this work is done by the editors of the DK Media World EFC.  They write articles, and make interviews, podcasts and films about wonderful creative people who collaborate with Dimash and those whom he inspires: musicians, directors, poets, athletes, photographers, stylists.  On the club’s website you can watch interviews with such outstanding personalities as Lilia Vinogradova, Azamat Dulatov, Tatiana Navka and others. 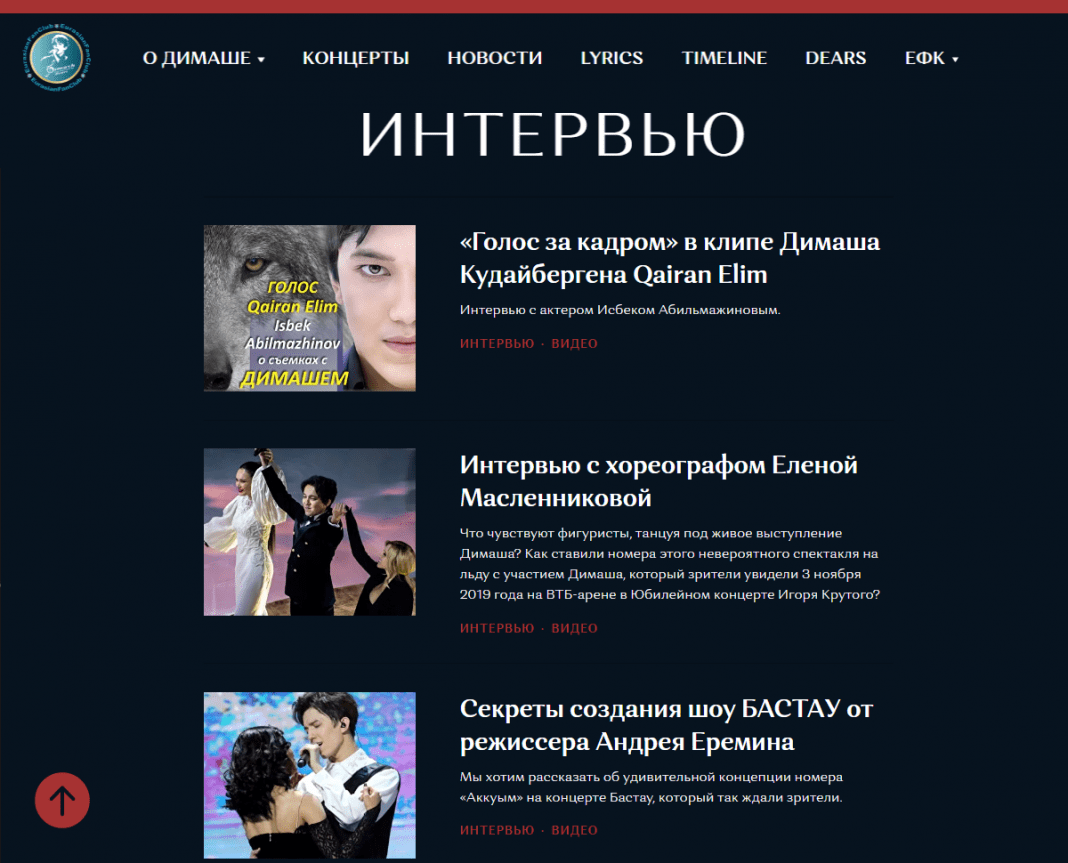 Articles.  It is no secret that, having gotten acquainted with the work of Dimash, understanding his love for his Motherland, and the traditions of his people, many Dears strive to learn more about Kazakhstan, its customs, folk musical instruments, and people who played an important role in the fate of the young artist.  Read articles about this in this section of the site. 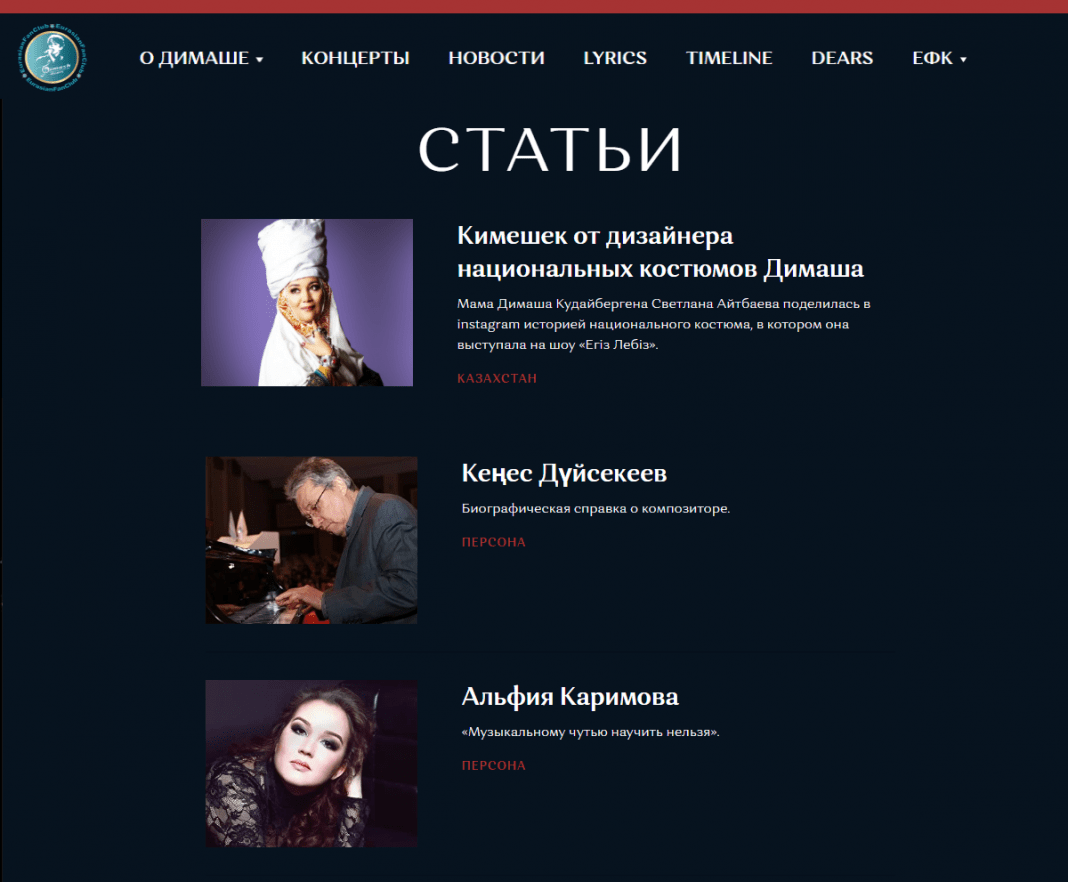 Translations.  Dimash’s fans live in many parts of the world and always want to know what the artist and his entourage are talking about; and what they write and talk about in the media.  The EFC team of translators strives to translate materials about Dimash as quickly as possible into languages ​​accessible to more people.  The arsenal of translators includes Kazakh, Russian, English, German, Italian, and Spanish.  Many materials in this section of the site contain subtitles for easy video viewing. 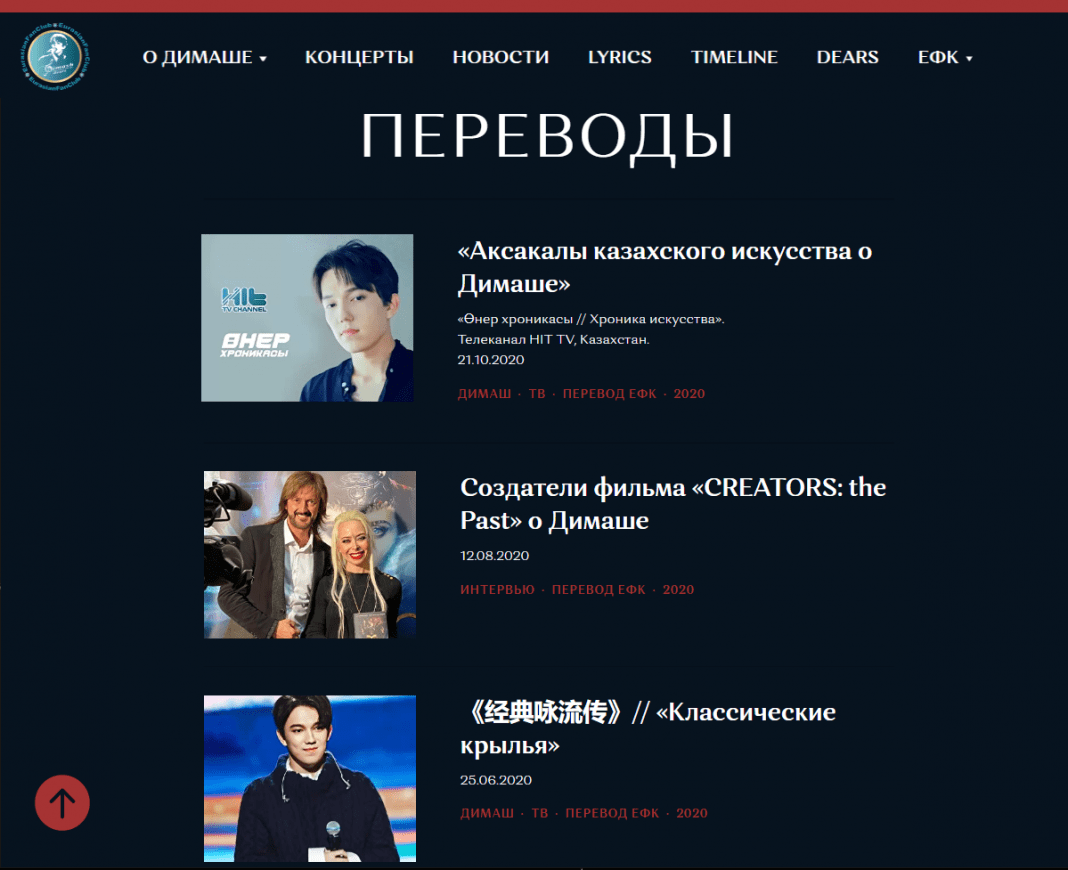 Fan club.  Friends, now we have reached the last page of the EFC website.  Here you will learn about the charity events organized by the club, how the Neskuchnye Novosti team works, as well as a lot of interesting things from the life of active and creative dears of the Eurasian fan club. 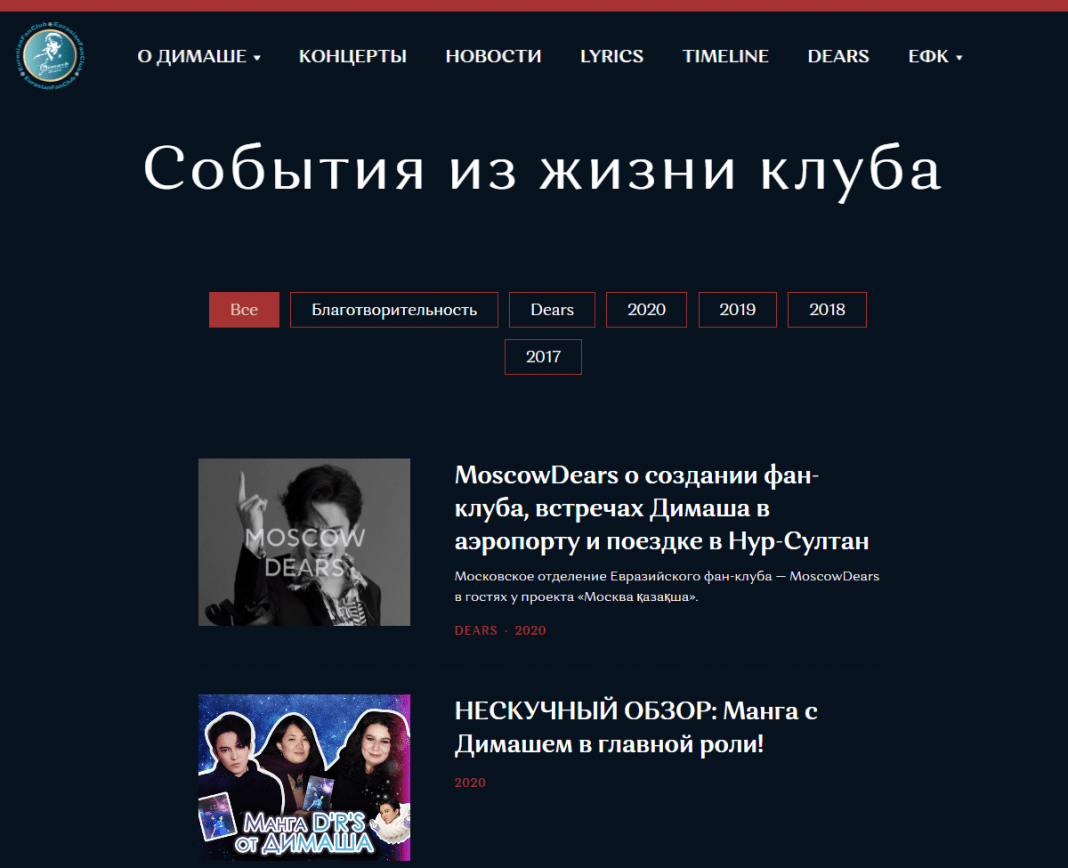 The EFC website is a constantly growing resource.  New content is posted on it in a timely manner and archive pages are gradually filled.  In order to keep abreast of updates, you can subscribe to the newsletter and receive weekly information about all new materials that appear on the website of the Eurasian Fan Club.