What symbols are present in the Swans song and in the music video, in the song that has become one of the most unusual in the career of a Kazakh singer? DimashNews has the details behind the story of making such a touching hit. 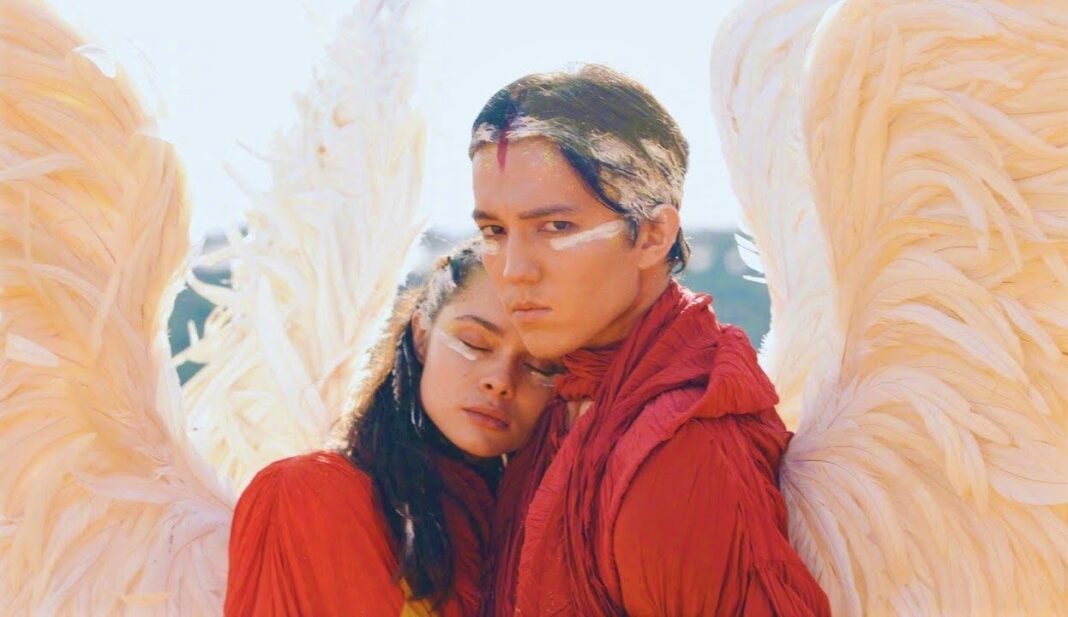 “Love of Tired Swans” is a song that appeared in Dimash Kudaibergen’s repertoire in 2018 and took a special place in the hearts of his fans. The audience was struck by the story of loyalty and love, without which life has no meaning. The composition sounded very expressive thanks to the creative union of Igor Krutoy, the author of the words of Mikhail Gutseriev and a talented vocalist from Kazakhstan. The music video for this song turned out to be no less impressive. But first, a little more about how it all began…

Music experts will surely remember that the first time “Love of Tired Swans” was performed by Lara Fabian. This composition has become a symbol of Igor Krutoy’s strong creative and strong friendship with the singer, who has Italian and Belgian roots, but sings, as a rule, in French.

The two met in 2004, collaborated fruitfully, released a joint album “Mademoiselle Zhivago” (2010). One of the bonus tracks of the disc in the French and Belgian version was “Je t’aime encore”. His melody later formed the basis of the future Russian-language hit about the love of swans.

As a result, the composition became one of the most famous joint works of Krutoy and Fabian. The track was released in Russian in 2014.

Years later, a young Kazakhstani was entrusted with the “male version” to this love story. Mikhail Gutseriev was responsible for the sentimental lyrics by adapting the lines. But before we move on to further narration, we suggest listening to “The Love of Tired Swans” in the version of Dimash Kudaibergen.

For convenience, we will also quote the words from the song:

Lyrics of the song “Love of Tired Swans”

Look into my eyes
Please forgive me, I regret
I love you, you’re my life
Without your warmth, I am obsessed about you

We could not hold it
We are tired, it’s difficult for us
I’m all alone, please understand me
Nothing is matter without love

And my days, without soul
I miss you, it’s all complicated
But we are still close, please say something
Call me, without your love it hurts

I ask you, please give in
My feelings are not my prose
Sometimes come to my dreams
Take me in, do not look for another

So, since 2018, “Love of Tired Swans” has entered the repertoire of the young Kazakh vocalist Dimash Kudaibergen. He sang it for the first time in the program “Central Television” on the NTV channel, and then at the concert dedicated to the Police and Internal Affairs Servicemen’s Day of the Russian Federation. After a successful premiere, the song became one of the singer’s most anticipated hits.

On December 10, 2019, Dimash Kudaibergen’s first solo concert took place in the USA. The large-scale show Arnau Tour Envoy took place at the arena of New York’s Barclays Center. According to the audience, the “Love of Tired Swans” was one of the expected events that night, and after his own performance, the singer invited the audience to join him for a cappella chorus.

The audience sang “Love of Tired Swans” at Dimash’s concert in New York.

A musical story about love and fidelity of beautiful birds has become one of the artist’s business cards. So, in early 2020, it sounded at all the singer’s concerts in Krasnodar, Kazan, Yekaterinburg, Riga and Kiev, where he visited as part of the new Arnau Tour program.

Song as a Source of Inspiration

“Love of Tired Swans” performed by a Kazakhstani performer acquired a new sound that inspired people from various spheres. So, the Russian gymnast Alexandra Soldatova performed under this composition at the stage of the World Cup in rhythmic gymnastics, and won gold in exercises with clubs, a ribbon, a hoop and a ball. The folklore ensemble “Dostyk Sazy” from Aktobe offered their version of the song. The sound of the melody was different due to traditional Kazakh instruments but made Dimash appreciate it. He even posted shared the video on Instagram with his fans.

The author of the music did not restrain himself in compliments:

“What an unusual version, so cool and so tasteful, thank you!” – Igor Krutoy wrote in the comments.

Who “released” “Swans” and Put It into the Light

Of course, when mentioning this song, one cannot fail to mention the key individuals who created it and made it happen, separately.

Producer and composer, renowned outside his country. People’s Artist of Russia, singer, actor. Variety of stars are honored to have works that were created by the maestro in their repertoire.

The composer’s discography includes more than forty albums and more than three hundred compositions performed by artists from different countries. In addition, he writes instrumental music and soundtracks for feature films.

In parallel with his work, Igor Krutoy took place as a owner of several large projects. Among them are the ARS production center, which created such international projects as New Wave and New Children’s Wave, the Morning Mail TV show, the Song of the Year festival, as well as the fourth season of Star Factory.

Igor Krutoy Academy is a creative space in Moscow aimed at teaching and unleashing the creative potential of children.

The author of the lyrics “Love of Tired Swans” Mikhail Gutseriev is a well-known Russian businessman. And, by the way, a native of Kazakhstan.

The future businessman, public and cultural figure was born on March 9, 1958 in the current Kazakh capital, and then in the city of Akmolinsk. In 1944, the ancestors of Gutseriev, like many other Ingush families, were subjected to repression and were exiled to the Kazakh SSR.

Later, Mikhail managed to work in Dzhambul (now Taraz) at a handicraft factory, in the same city he received his first higher education, studying “Technology of leather and fur”.

At the moment, Mikhail Gutseriev has his own production center, where songs and clips are created.

Gutseriev has many popular works performed by Russian stars. A lot of the songs he created topped the charts. His lyrics have become laureates of the Song of the Year festival seventy times, the Golden Gramophone award five times, and the author received the Poet of the Year award for the song Love of Tired Swans.

“Swans” and the Music Video

The theme of love, difficult human relationships and, in fact, swans have already appeared in the work of Dimash. His first video, released in 2019, was for the song “Akkuym” – “My White Swan”.

According to the plot, the heroes of the video create a joint picture with two refined birds. In the clip “Akkuym” the hero of Dimash and his beloved were not destined to stay together, unlike another swan story…

Video for the song “Love of Tired Swans”

It is interesting to know the history of the creation of the video for the song “Love of Tired Swans”. It all started with the fact that after recording the song, Igor Krutoy and Dimash thought about creating a music video. There was such a dialogue:

– Igor Yakovlevich, who shot the video with Hvorostovsky?
– It was Alan Badoev.
– I wish he would take pictures for us!
– So I’ll call him.

Dimash was very happy that he could work with one of the most famous clip makers in the post-Soviet space.

Alan Badoev is a Ukrainian film director, clip maker, producer and former host of the Eagle and Tails program.

The idea for the video was formed from various things that inspired Badoev. The result is a mix of the legend about one-winged angels, capable of flying only in pairs, and the style of the film “Romeo and Juliet” by Italian director Franco Zeffirelli.

Alan Badoev spoke about the main idea as follows:

“When working with Dimash, I wanted to remind the viewer once again that even being one-winged we can fly if we hold hands and divide the sky in two”.

The video was shot on a grand scale – in beautiful locations in Spain near Malaga and in Ukraine. Over 70 different specialists took part in the filming process.

The premiere of the music video took place on April 18, 2019: on the air of the Muz-TV channel and on the YouTube channel of the author of the words GutserievMedia.

And in 2019, in the special Muz-TV rating, the video for the song “Love of Tired Swans” entered the top hundred.