“Life goes on” is the title of the song that opens BTS’s new album “BE”. There, the members of the South Korean group reveal an unexpected side, sharing their mixed feelings with fans.

The album “BE” was released on November 20 at 14:00 Korean time. The album contains the emotions and thoughts of  BTS members that have haunted them during this very difficult time for all of humanity. 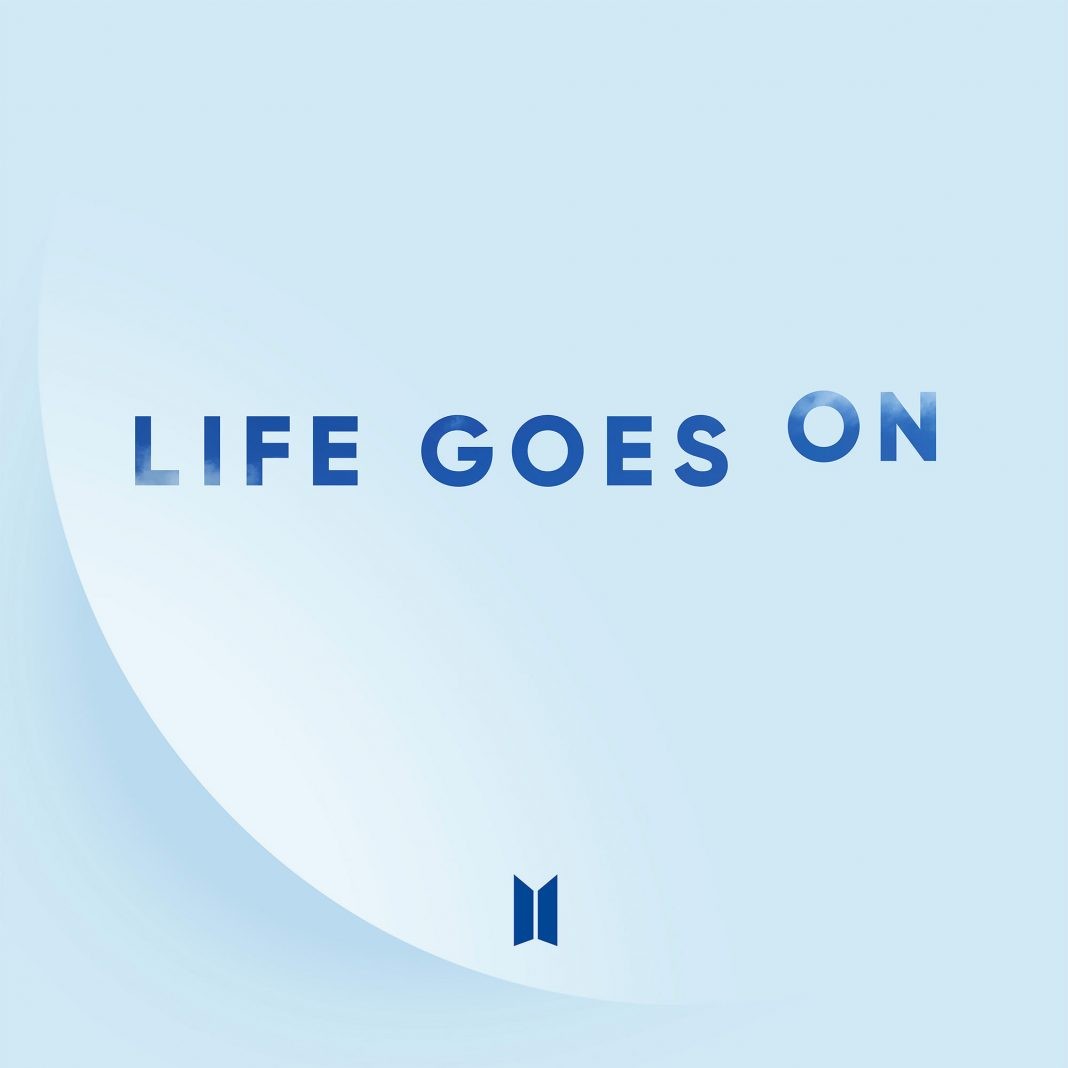 The official announcement of the album’s release was on September 28, and its description was:

“BE” contains the most “BTS” music that exists today. The new story from BTS begins with the statement that “even in the face of a new and unusual everyday life, our life continues”, thereby conveying a message of healing to fans and the world.

“This album was also the most special because BTS members were involved not only in the music, but also in the concept development. Throughout the album, fans will be exposed to BTS’s thoughts, emotions, and deepest thoughts, accompanied by an even richer and more musical spectrum.”

THE PREPARATION OF “BE”

Preparation of the new work began in April. For the first time in the history of the band’s existence, BTS members talked about almost every step of their way through online broadcasts and vlogs while preparing the CD.

The guys told the fans about the concept, how music is created and how song recording was progressing. They shared their ideas and experiences.

In his own vlog, one of the members said:

“We put in a lot of thoughts that haunted us constantly during lockdown. I think our new album will have a lot of things that are close to you. Please wait for it. This is an album that the members put their soul into.”

BTS revealed the new album’s song list 10 days before the comeback. It includes eight tracks, seven of which are new, and one is the English-language single “Dymamite”,  that debuted at # 1 on the US Billboard Hot 100. It is the band’s first top-of-the-chart hit in the United States. 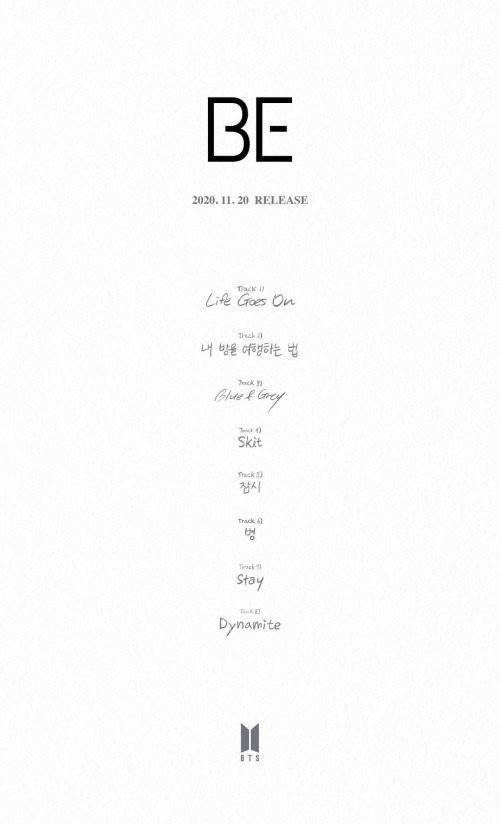 The album’s opening song “Life Goes On” is written in the alternative hip-hop genre, accompanied by acoustic guitar. Due to the coronavirus pandemic, all the people of the planet found themselves in a difficult situation, having lost their usual way of life.

In “Life Goes On”, BTS sends a comforting message to the world: “Even so, our lives go on, so let’s continue to live, too.”

The song also touches on the band members ‘ own regret for not being able to meet their beloved fans.

“Fly to My Room” is a unit track performed by Suga, J-Hope, Jimin, and V.

“Blue & Grey” is a guitar-based pop ballad written by V with the help of members RM, Suga, and J-Hope.

“Skit” is a recording of the dialogue the guys had when they first topped the Billboard Hot 100 with “Dynamite”.

“Telepathy” was written by Suga and has a funk beat.

After the first teaser of “Life Goes On” was released, fans’ attention was immediately drawn to the fact that the director of the video was one of the members – Jungkook, who always wanted to try himself in this role.

Over the seven years of the band’s existence, Jungkook has repeatedly proved that he is a very talented music video maker, periodically sharing his own work with fans. 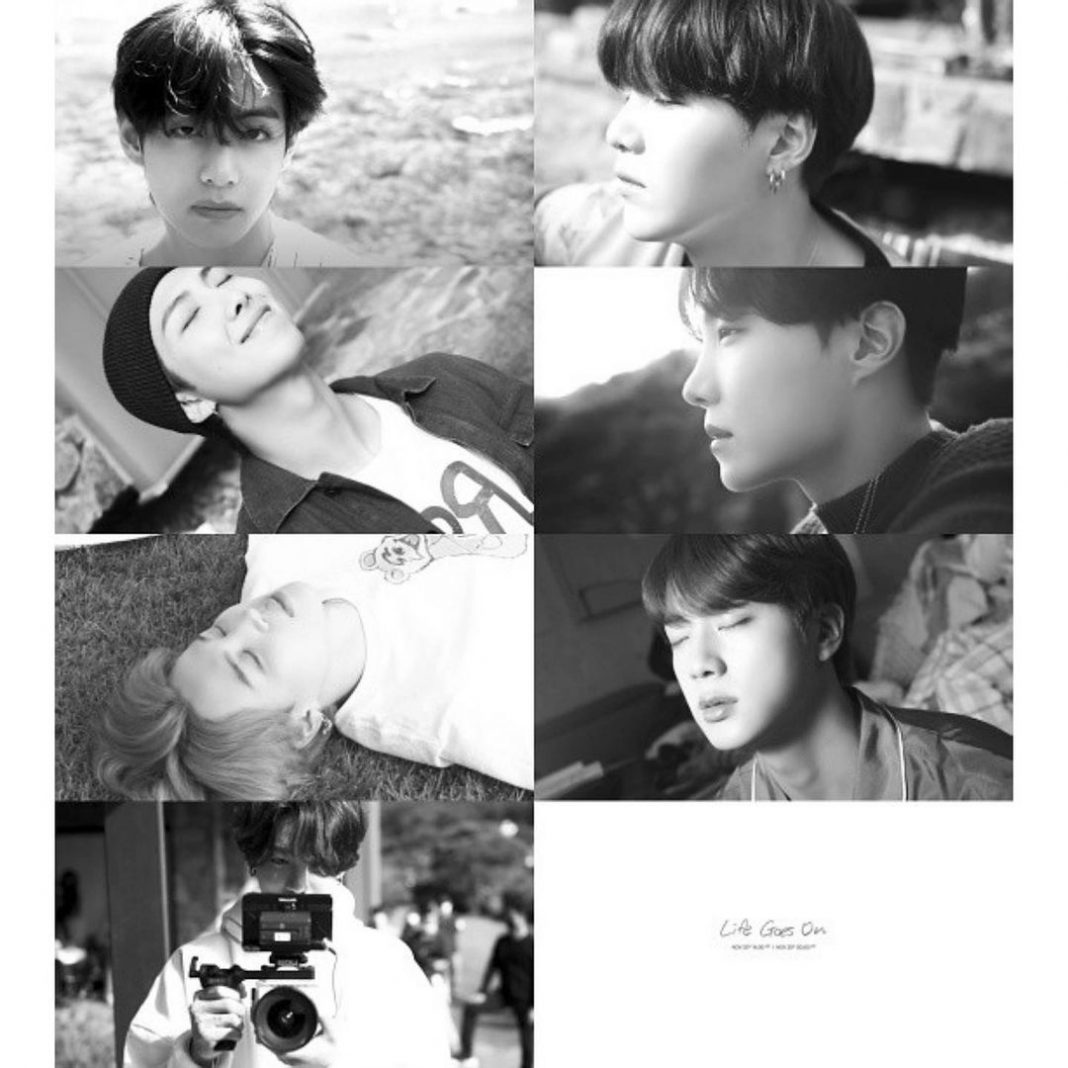 The music video for “Life Goes On” begins with Taehyung (V) driving a car while taking off his mask. And, despite the current situation around the world, the landscape outside the window remains as beautiful as ever.

The clip then shows the members’ monotonous, quiet life in their home.

Each shot is thought out to the smallest detail and causes longing in the hearts of fans. For example, Namjoon running his finger over the dusty seat of his favorite bike, which he hasn’t ridden for a very long time due to forced self-isolation.

Then you can see the big stadium in Seoul outside the car window. There, BTS completed their last tour, not having time to start a new one due to the coronavirus.

Here on the screen, all the BTS members are singing on the stage of a large concert hall, which, alas, is empty, and it seems as if there is no way out of this situation.

But in the end, behind the members, a white screen flashes brightly with the words “Life Goes On”, thereby instilling hope that all the hardships will be overcome without fail, because life goes on.

Interesting fact: before the title of the song “Life Goes On” was officially announced, BTS already gave fans small hints about it.

Speaking at the 75th UN General Assembly, the group concluded with the phrase: 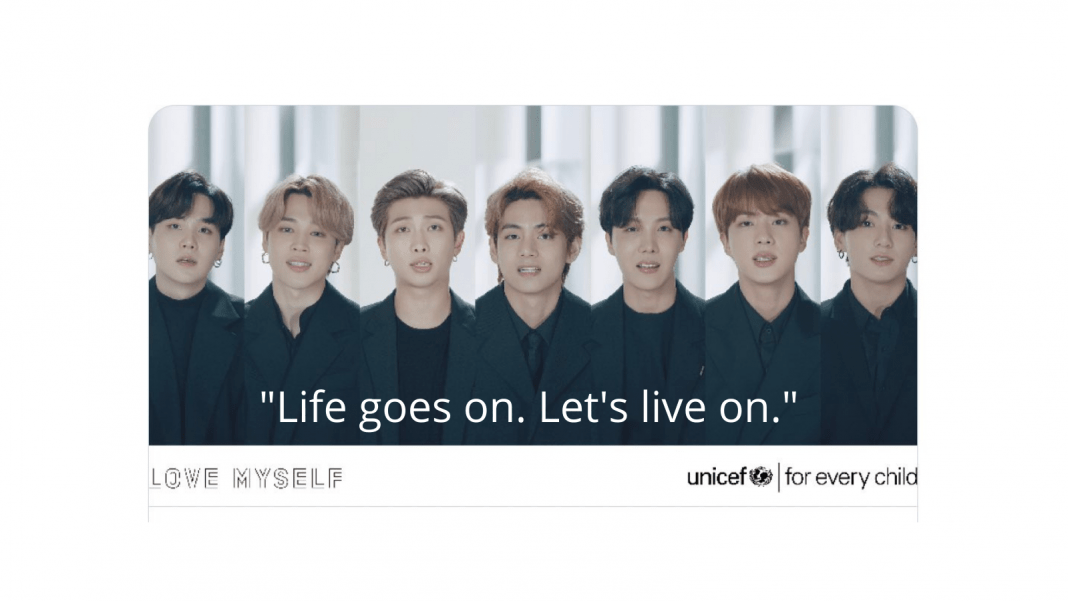 WHAT’S INSIDE THE PHYSICAL VERSION OF THE “BE” ALBUM?

Pre-order of the album was announced on September 28. It should be noted that albums by K-POP artists often contain a lot of interesting “buns” for fans. 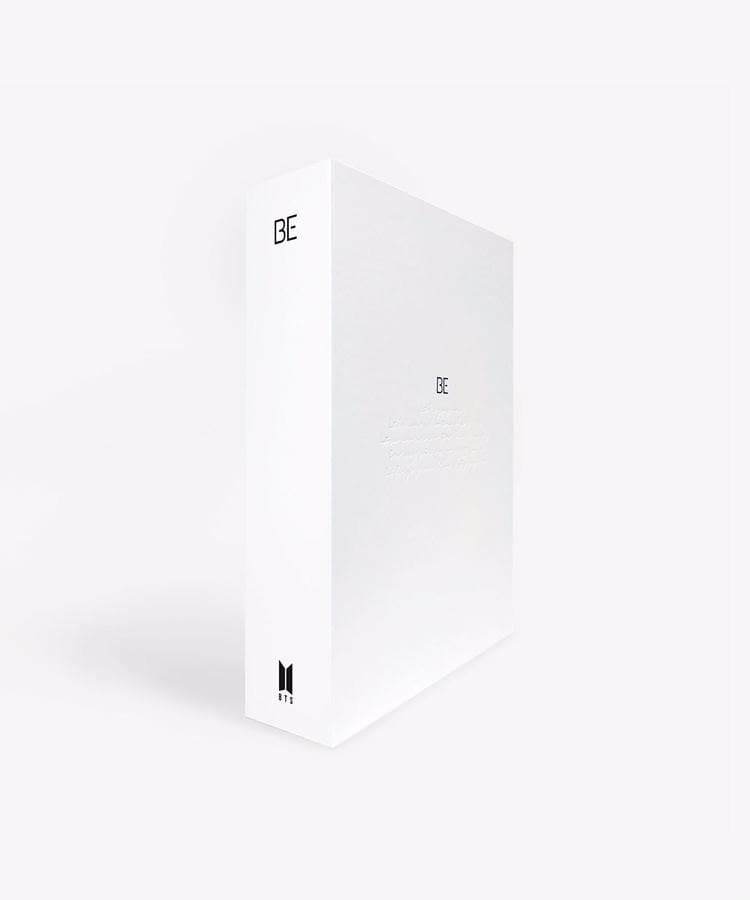 So, by getting the physical version of “BE”, fans will also receive a photobook 100 pages, 32-page making book, photo frame, poster, photo card, polaroid photo, card and poster.

THE CONCEPT OF “BE”

A month before the album’s release, BigHit Labels, whom BTS is releated, released the first concept photo. On it, themembers are in a small room with a lot of musical instruments.

At this time, fans joked that the guys wanted to convey the realities of modern life-video calls with colleagues and teachers, when your friend sees only the top, while the lower part of the body is hidden by the table, which allows you to stay in any home clothes. 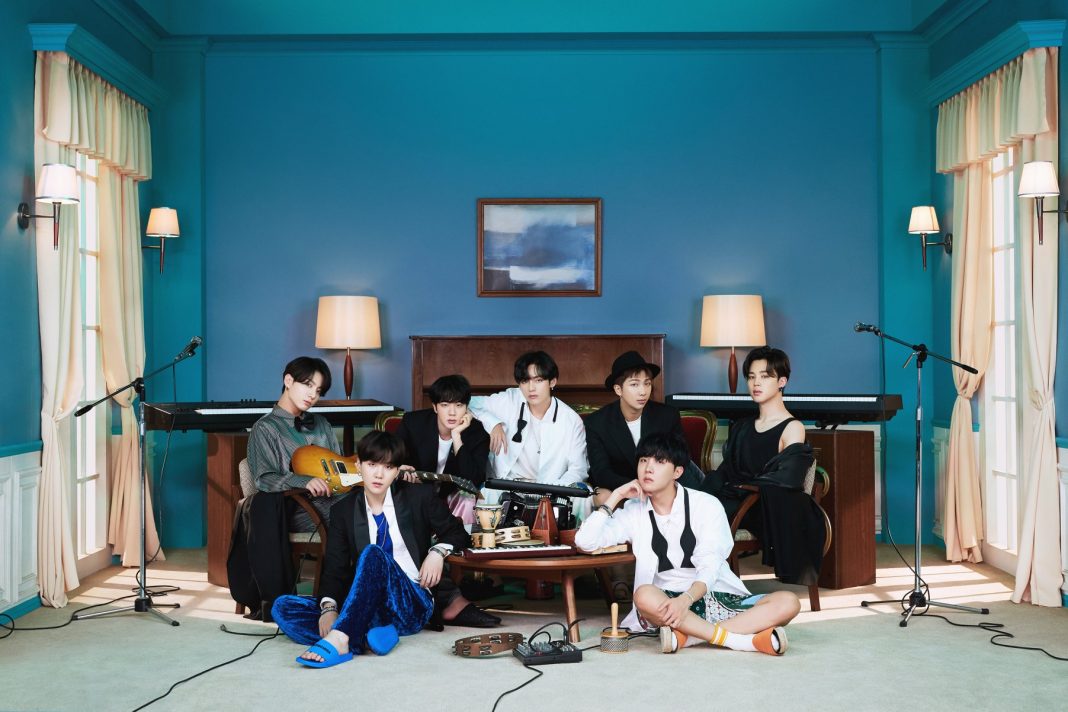 After that, separate concept photos of each member and their room began to appear, the design of which conveyed the personality and character of a particular idol.

And finally, almost before the album was released, short concept videos were published that give an idea of the daily life of twenty-year-old BTS. 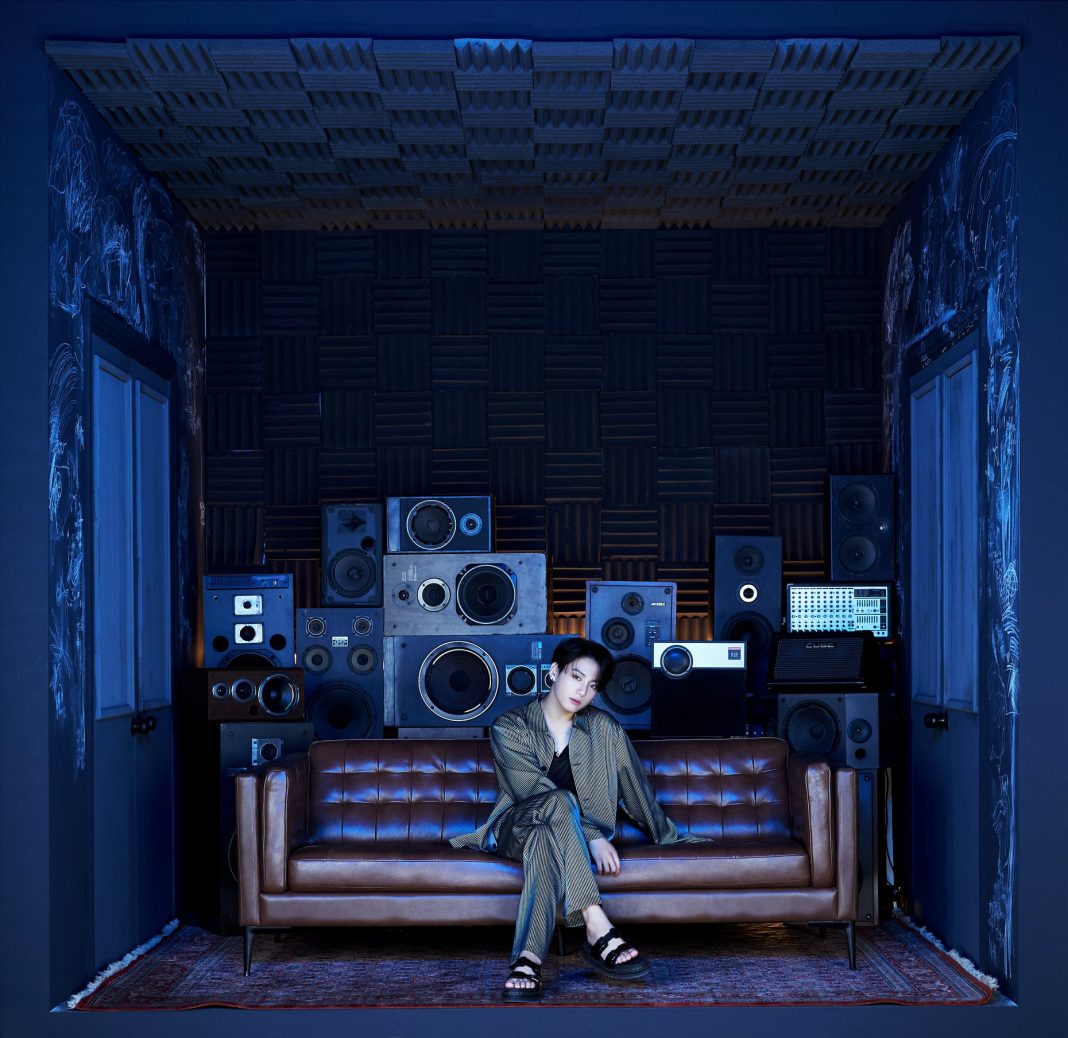 Young musicians believe that this album, which is really special for them, will resonate with many people, because it shows the modern reality that not only BTS, but also all the inhabitants of the planet.

At today’s press conference dedicated to the release of “BE”, the members shared that the situation with the coronavirus infection has affected them. They were upset about the cancellation of the tour and wanted to share their feelings with the audience through songs.

With their music, BTS hopes to convey their warmth and hope to their fans. Life may seem to have stopped, but despite everything, it is important to stay afloat and find inspiring moments even in the current realities.

The music video for “Life Goes On” was released on YouTube at 14:00 Korean time. An hour later, the number of views reached 12,500,000. The track also holds leading positions on the streaming platforms Apple Music and Spotify.

It is expected that in the first day the number of views of “Life Goes On” will exceed 100 million, as it was already in the history of the group with the video “Dynamite”.