Figure skaters Evgenia Tarasova and Vladimir Morozov presented a new free program to the song “Adajio” performed by Dimash Kudaibergen. The number earned them second place at the fourth stage of the Russian Cup.

This is not the first time that figure skaters stage their performances to the music of a Kazakh singer. Last year at the Russian Figure Skating Championships, Evgenia Tarasova and Vladimir Morozov impressed the audience with a sensual performance to the “S.O.S” performed by Dimash. And subsequently they presented this program more than once. 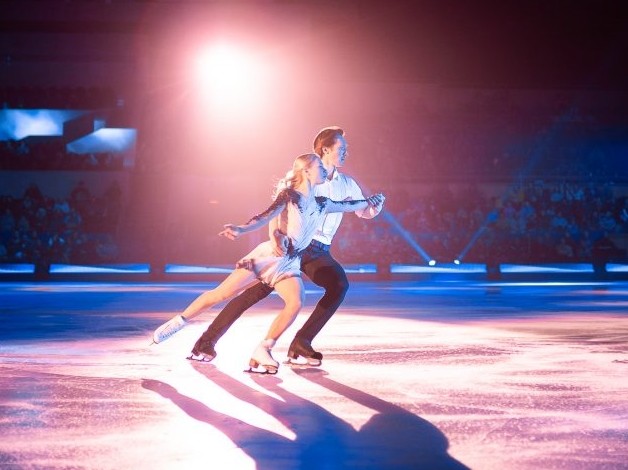 This incredible and powerful composition once inspired Ilya Averbukh to create a perfomance for it. Earlier in an interview to DimashNews, the Russian Olympic medalist admitted that Dimash’s singing to the music of Igor Krutoy is asking for ice:

“Plunging into this music, you involuntarily see a future dance in front of your eyes, which will ideally suit it. I remember our cooperation with great warmth and wish Dimash to conquer the greatest heights. I, in turn, when I put numbers to these compositions, experienced a colossal surge of energy. I really hope that we will be able to deliver more than one number.”

And now, a new statement to another equally amazing song “Agajio” performed by Dimash finally saw the light.

Vladimir Morozov shared that he and his partner are inspired by the vocals of the Kazakh singer. The skaters took second place at the fourth stage of the Russian Cup in Kazan, gaining 227.13 points. This is a good result, considering that the athletes missed the start of the season due to COVID-19, which Vladimir Morozov got sick with.

– We wanted freshness, no one has ever skated in such treatment, – the skater told. – We really like music, it pushes us forward. Dimash’s strong high-pitched vocals help us. While riding, some special sensations are experienced. We are very happy that we had a decent four weeks of preparation after my illness. There were two mistakes, but they are expected, because we don’t have enough energy for the ending.

Perhaps, now some flaws and roughness caused by a long break of athletes are visible, but the program is predicted to be successful to the main starts. The music, stunning vocals and sensuality and penetration of Tarasova and Morozov do not allow us to doubt this.