The cajòn is the most emblematic percussion instrument native to Peru and has been recognized around the world for its irreplaceable accompaniment to various musical genres such as flamenco, jazz, rock, tango, samba, boss nova, and Latin and Caribbean traditional music.

In 2001, the cajòn was oﬃcially recognized in Peru as the country’s cultural heritage, and in 2014, the Organization of American States (OAS) awarded the Peruvian cajòn the international award “Peruvian Instrument for the Americas”. Since August 2, 2018, Peru has celebrated the Day of the Peruvian Cajòn every year. 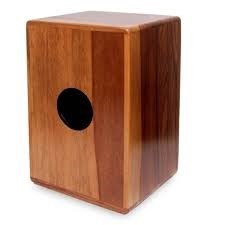 For the construction of the cajòn, mahogany and cedar wood are most preferred. Its average size is 47 cm X 33 cm X 29 cm with a thickness of 15 MM. When playing the instrument, the master of the cajòn, the cajonero, sits on the musical instrument, making it comfortable between the knees. The modern cajòn has three bolts that serve to adjust the tone. While playing this musical instrument, the percussionist can get different sounds using either the palms or the fingertips. In order to enrich the sound of the cajòn, metal objects are sometimes added inside of it. For example, in Spain, three or four metal strings are placed inside the cajòn to add resonant sounds to the game.

The history of the cajòn dates back to the 19th century, when slaves from African ethnic groups arrived in Peru during the Spanish colonization.

Percussion instruments have always been an integral part of traditional African music, which is why African slaves were looking for instruments that would allow them to express themselves. Due to the prohibition by the Spaniards, the slaves could not play the drums that they brought with them. However, the desire to express themselves through music was so great that one day they discovered wooden boxes that were used to transport goods. Seeing in such a seemingly inconspicuous object an excellent musical instrument, African slaves began to use it in their sacred rituals and artistic expressions.

Cajòn is used as an accompaniment to dances such as zamacueca and tondero, which originated from the central and northern coast of Peru. It was thanks to these dances that the Peruvian musical instrument began to gain popularity.

Cajoneros get a rich spectrum of sounds by playing different parts of the cajòn. For example, the edges of this musical instrument give their own special sound, while the central part and its upper edge are completely different.

Spanish guitarist, musician and flamenco composer Paco de Lucia discovered the Peruvian cajòn in 1977 when he visited Peru on his South American tour. During an evening at the Spanish Embassy in Lima, he met with the Peruvian singer-songwriter and folklorist Chabuca Granda, accompanied by the distinguished Cajonero musician Caitro Soto. When Caitro played the cajòn, Paco was surprised by its amazing sound and stated that it was this amazing resonant sound that flamenco needed.

When the Peruvian cajòn was adopted by the flamenco music community, percussionists began to master this instrument one by one, finding in it the very necessary sound for modern flamenco.

Nowadays, the cajon is also played with drumsticks or pedals. We can even find electroacoustic cajòns, which have a sound as close as possible to an acoustic cajòn.